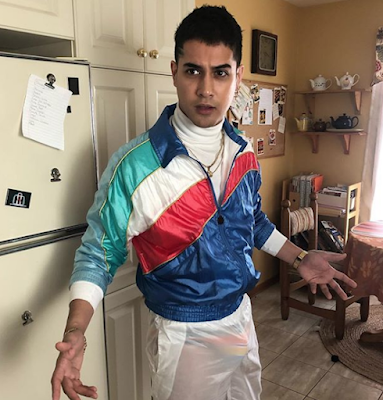 Nice transparent trousers there, Avan. (pic via) On that note damn I wish Starz would announce a second season of Now Apocalypse already. I re-watched Gregg Araki's film Kaboom the other night, inspired by Haley Bennett's killer performance in the film Swallow at Tribeca and having not seen it since around the time it came out in 2010, and was surprised by just how similar the two are -- I knew there was overlap as there always is with Araki stuff, but NA feels especially Kaboomy. Clueless cocktease roommate, snarky blonde BFF, technicolor spangled outfits, trippy death scenes, body fluids, Roxane Mesquida. It's got everything shy of Beau Mirchoff nipple play (a gaping lack, admittedly).

I'd take Avan over Beau in a heartbeat!

I don't know why, but this show didn't connect for me. I grew up an Araki fan (Mysterious Skin is my all-time favorite from him, with Doom Generation a close 2nd), so I get his style of writing and all that. I just flat out didn't like any of the characters. Maybe I'll take a day and watch all the episodes in one sitting if a 2nd season gets announced. Although, the ratings seem pretty bad...wouldn't be shocked if STARZ cut ties.

Yeah, Kaboom is essentially a rough draft of Now Apocalypse. I mean, even the mysteriously aloof French archetype is played by the same actress. Hehe.