.
I don't usually get this personally confessional unless it's in the context of a movie review that's drawn something specific out of me, but I was hit with the one-two punch of a song from the Call Me By Your Name soundtrack, weakening my guard, and then the above song, Annie Lennox's "Why", on my way to work this morning, and I've got memories on my mind. So I'm about to pretend this place is more my diary than normal -- look away if you must.

"Why" was the first song I ever slow-danced with a boy to. I fell immediately in love. Unfortunately I already had a boyfriend. My first boyfriend, the one I talked about in my well-received CMBYN reaction actually -- his name was Brett. We must've been together a few months at that point; I was in  my first year of college, and Brett threw a small party at his house.

Brett was literally the only gay person I knew. I never knew any gay people growing up -- I wasn't sure they were real. I described meeting Brett in that other piece though -- this party was where I met more gay people. And where I danced with one named Jeremy. I remember everything about him to this day -- I had the biggest crush on him for the longest time. We did go on a sort of date once, after Brett had broken my heart (more on that in a second), and it didn't go well, not well at all, since I'm the shyest person in the world -- I know you wouldn't guess that given the barfing out of every thought I do on this site but this site is more the me I'd like to be, not the me I really am.

So the date was a disaster -- I could barely speak. But still now every time I hear that song I remember slow-dancing with Jeremy, the first boy I ever slow-danced with, at my boyfriend's party. This impossible, impossible thing, happening. What even was this? This happened? Boys could dance together, slow to a pretty and sad song? It was like the world cracked open -- I was elated but I was probably also angry, I probably am still angry and damaged from the fact that I spent a full eighteen years of my life not knowing such a thing was even possible. 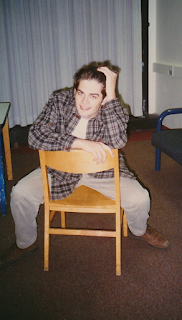 Anger aside, it was the most spectacular feeling. I don't know if Brett saw it in that moment, me and Jeremy slow dancing, but in retrospect that night feels like the start of the end for us, and then he went and did me the world's biggest favor by breaking my heart. We broke up not long after and I reacted as any eighteen-year-old in the world since time immemorial has -- by collapsing into a heap as if time had stopped and everything had literally ended. I spent an entire month sobbing. I'm sure Brett had his own reasons that weren't so altruistic -- as I said I was so closed-off as a human being, closed-off from any understanding of the possibilities of the world at that point, that I can't have been an easy boyfriend to have; the clinginess, the neediness, must've been smothering.

But I do remember Brett saying at the time that he was doing it for me -- because I needed to go live. I needed to go slow dance with more boys; I couldn't go falling in love with every single one of them. So I went, after my month of sobbing, and I slow-danced, and fast-danced, with lots and lots and lots more boys. I, uh, danced a lot in college. Not as much as many, perhaps -- I've always had a serial monogamist's heart. I may've gotten a little better at ending the dances but a little piece of me stays with every one of the dancers.
.
Who? Jason Adams When? 10:17 AM

Labels: Call Me By Your Name, especially random nonsense

1. Is that a picture of an 18-year old Jason? If so, how cute were you?
2. Your outfit takes me back to a much happier, simpler time... I hear Alanis, the Cranberries and Nirvana playing in the background. Is that a hint of CK One wafting through the air? Please, pass me a Zima while I kick off my Doc Martens.
3. Thanks for sharing your histories. I think it's so important to have those moments where we all can say, "Been there," or "I've felt that." or "Me, too! I thought I was the only one." College for me was similar. Were it now for IRC and other chatroom apps, I may not have been able to deal with being gay. "Dancing" a lot with boys helped, too.

You are a very great writer. I am seeing Annie Lennox at end of the month, and if she performs Why, it will be heard thru the veil of your memory.

Thanks so much for sharing, Jason. CMBYN and your deeply personal posts about it also took me back to the first boy I ever kissed, and I've actually found myself wondering what he's up to quite a lot in the past year and a half. It's crazy how certain pieces of art can bring certain memories flooding back.

I can relate. I have my own memory of slow dancing with a guy to Annie Lennox (“No More I Love Yous”). When all the other boys were Madonna fanatics, Annie was my girl.

I hope you write a memoir some day. I would love to read it.

Great post! Made me recall my first slow dance with a guy to Brian McKnight’s ‘One Last Cry’ - Eduardo with a cock ring on a chain around his neck! Ah the early 90s ��

Thank you for sharing your beautiful writing made of memories.