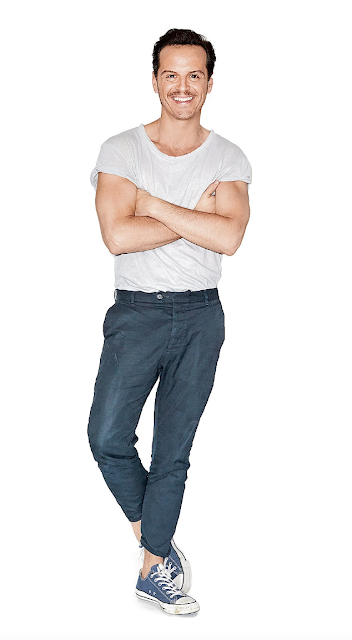 The second season of Fleabag finally dropped on Amazon the other day, giving we Americans a taste of Andrew Scott's forbidden fruit, ahem, the "hot priest" heard round the world. Have we all watched it by now? I consider the show impeccable, beyond reproach, a perfect thing. I don't know that I can even write about it without just devolving into a series of gifs showing people orgasming. Anyway there's a new chat with Scott in the NYT that I recommend; here's a choice bit where they asked him about how he, a gay man, managed to display such insane chemistry with writer star genius Phoebe Waller Bridge:

"I just find it just sort of shocking … I’m hesitant to say insulting but, I mean, it’s not what chemistry is about. The reason that chemistry is such a fun word to say is because that is about more than sex and it’s about more than brains. It’s about fun and connection. And at the stage door when I do a play, the fans that come and see me are mostly female. For years I’ve always thought, Well, this isn’t based on my sexuality. So who is creating this myth?"

Fleabag has really brilliant writing. The first episode of the second season is a really risky concept executed perfectly.

I love that the great Andrew Scott is finally achieving full sex symbol status. Hollywood needs to take note. A gay actor can be a convincing straight man. The chemistry between him and Phoebe Waller Bridges is combustible. Brilliant, brilliant show. Bridges is a savant. And Olivia Colman! Forget about it.

Omg! Fleabag is the best! That ending!
Andrew was a guest on the latest episode of the podcast Homophilia. It’s such a great podcast with very insightful interviews. Check it out if you’re not already a listener.

LOVE Fleabag. Only 2 episodes into the 2nd season and I just can't get over how brilliantly written it is.

And Scott is so fascinating on the show. Sexy but also kind of a weird mess but also a good person but not a saint. He had one of my favorite scenes in Pride so I'm glad he's getting attention.

Whishaw, Scott, lee pace (who am I missing) have all had hetero romances onscreen that have truly become my favorite love stories on television, more memorable to me than many film romances. Not only that they were definitely hotter and sexier to boot.

I've literally watched it three times there is a so much genius just in the tempo and how that works with the material. Your exactly where she wants you, one second your cosy next you're gasping nakedly yearning.