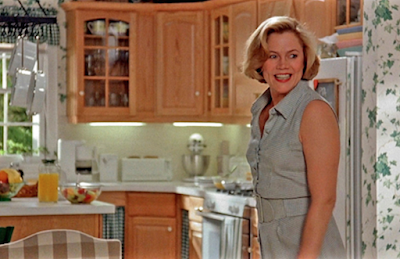 Is it weird that nearly every time I walk into the kitchen of my apartment I get Beverly Sutphin's bird-song stuck in my head? It happens at least three times a week, and I swear to you that I'm not exaggerating. Just ask my exasperated boyfriend.

Anyway, my mild psychoses aside, Serial Mom turns 25 this week! It was released on April 13th 1994 -- did you see it on its original run? It was, for like many of my generation, my introduction to John Waters -- I saw it well before I really knew who he was and I was scandalized, I tell you, scandalized! The "Sun'll Come Out"  dog shrimping scene left a scar. If I'd known what John had done earlier in his career poor innocent little me would have fainted.

And since MoMA is screening Female Trouble in a couple of days I decided to give this week's "Beauty vs Beast" at The Film Experience over to this double dose of Dreamlanders -- click on over to vote your Mom of the Week. (And don't forget that John has a new book coming out next month!!!)
.
Who? Jason Adams When? 11:34 AM

"No! Please! Fashion has changed!"