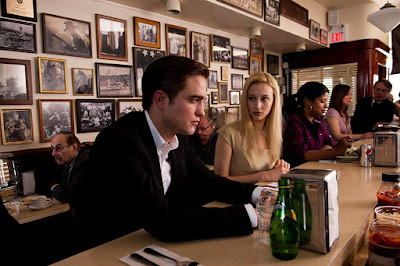 Elise: You were just in Singapore.
Eric: What makes you say that?
Elise: I can smell it. Every country in the world has its own distinct odor and yours is of Singapore.
Eric: Then would you kindly relate to me just what Singapore is supposed to smell like?
Elise: Fish mostly, and sickeningly sweet air-freshener.
Eric: I was at a fish-market, the one located on 48th street, sandwiched between the used tissue dealership and the asbestos teddy-bear factory.
Elise: No, you weren't; you smell specifically of Singaporean fish. I know singaporean fish when I smell them... Dinosaurs.
Eric: They have blueberry pie in Singapore. A uniquely American dish. There's cream in blueberry pie, but it's more often referred to as slurry. Slurry is what cream is called when it's being harbored in pie-crust. I generally prefer to simply refer to it as pie-filling as I find words like slurry to be most unappetizing.
Elise: I need a haircut.
Eric: Rats have been used as currency ever since the extinction of the hamster. This is the only explanation for how Jerry Lewis became so well respected in France.
Elise: France smells of shower currents.
Eric: I didn't ask you what France smelled like.
Elise: Whether or not asked the question is irrelevant as I have already informed you of the answer. There is no way to reverse this. Your best hope for survival is to eliminate the future for only when the future has been eradicated we can ever hope to reincarnate the past as a means of elongating the present. Then, and only then can mankind have the ideal place in which to store his pet rock collection.
Elise: You have just reminded me; I've yet to start writing the speech I promised Sara Palin.
Eric: Since when were you ever a speech writer?
Elise: It started when I was a bluejay still attending kindergarten at Harvard. I tiptoed through the tulips exactly the way Tiny Tim instructed. Latter it would be my misfortune to find out that he never actually write those lyrics. The betrayal is too much to bear and yet I remain emotionless - Haircuts.
Eric: Fuck haircuts! It's the mighty pomegranate that contains much needed antioxidants... Potatoes!

For our purposes I considered editing down this conversation -- there are about ten different "life lessons" inside of it! -- but as it kept going and going I got more and more hypnotized by its nonsense... which of course was David Cronenberg's point. I really should watch Cosmopolis again -- I hated it the first time, adored it the second time; who's to tell what might happen with a third go? And I think about it weirdly often. It's not weird today that I am bringing it up though, since today is Sarah Gadon's birthday -- happy birthday, lovely Sarah Gadon! I'll actually be seeing her in a movie called American Woman that's screening at Tribeca very soon -- you can read about it right here. It co-stars Hong Chau and is based on Patty Hearst's story, sorta kinda. 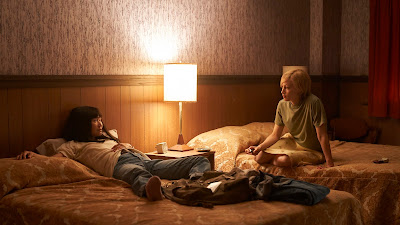 I think about this one a lot too. Especially Pattinson and Morton. And simply the design(s) of it.