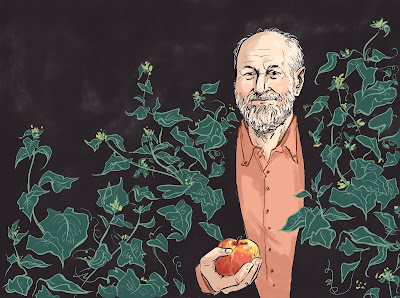 (illustration via) Can't believe it's taken me this far into the day to post about the news that came out last night on the Call Me By Your Name sequel... specifically the book sequel, that is. Coming hot on the heels of Armie Hammer crapping on the movie sequel this is something! We've known for awhile now that André Aciman was cooking up something fresh and juicy for Elio & Co. -- I posted video of him at a Q&A here in New York admitting as much several months ago -- but now we know what's what thanks to a press release via his publisher. The book will be called Find Me, it will be released on October 29th of this very year (!!!), and here's the plot:

“In ‘Find Me,’ Aciman shows us Elio’s father Samuel, now divorced, on a trip from Florence to Rome to visit Elio, who has become a gifted classical pianist. A chance encounter on the train leads to a relationship that changes Sami’s life definitively. Elio soon moves to Paris where he too has a consequential affair, while Oliver, now a professor in northern New England with sons who are nearly grown, suddenly finds himself contemplating a return visit to Europe.”


I bet Michael Stuhlbarg was happy reading this! Amira Casar, notsomuch. Why you gotta do Annella like that, André??? Vulture also got a quote from Aciman on all this:

“The world of ‘Call Me by Your Name’ never left me. Though I created the characters and was the author of their lives, what I never expected was that they’d end up teaching me things about intimacy and about love that I didn’t quite think I knew until I’d put them down on paper. The film made me realize that I wanted to be back with them and watch them over the years — which is why I wrote ‘Find Me.’"


Every time I've heard Aciman talk about the experience watching the film he's seemed tremendously moved by what Guadagnino & Stuhlbarg did with Elio's father so I'm not surprised that he was drawn to exploring Sami's life a little more -- he's spoken eloquently about the ambiguity in some of the character's final words to Elio, about how he's never known the sort of love that Elio & Oliver knew.

But it doesn't sound like he'll be skimping on details of everybody's lives -- unlike the book of CMBYN, which was told entirely from Elio's perspective, it sounds like Find Me will be coming at us from several points of view, spanning the globe. What do we think?

Oof, I adore Call Me By Your Name, both the book and the film, and I hate, hate, hate this. Why break up that marriage? I mean I'd want a sequel to be about Elio and Oliver to start with, not Elio's parents, but if you're going to bring them into it ... more and more a sequel sounds like a lousy idea.

This subplot involving Elio's father immediately made me think about the Big Reveal at the end of Chapter 1 of Enigma Variations. Surely ...?

(It's good to finally have a name for Mr. Perlman, I have to say.)

Thank you for continuously singling out Amira Casar's incredible work in the film, too, which is mostly overlooked. Her glances, caresses, smiles ... throughout the movie evoke just as much love, warmth and approval as Mr. Perlman - Sami! - does at the end of the film with his beautiful speech.

I wrote so many posts about the film but I always meant to write another one about how Mr. Perlman GOT A NAME in the film -- he is called "Sami" for the first and only time by his archeologist friend when they go see the statue brought up from the lake. I always liked that hint of him as a person outside of Elio and I'm glad we'll be getting more! (Real sad about that probable lack of Annella though.)

You need to put out a book of your Call Me by Your Name writings!!!

What do you think about Samuels sexuality? I had a big discussion about it... did the author explained it?

Aciman hasn't explained it yet, but I assume that's what the sequel will dive into. I don't have an answer, it's all been left purposefully vague so far. There are hints in every direction. I think he just had a youthful fling with dude-on-dude myself, but it sounds like he might be dipping his toe back in...

Meh! I liked the parents relationship in the film, it was so much more rounded and engaging than the book and they were so warm and lovely together and in how they related to Elio as a couple and as parents. Not liking this plot twist at all - don’t go there, Luca!
Also, I’m in the minority’s here of really disliking the dad speech in the film, it works for me in the book but I found it over egged in the film. Mind you, I saw the film before reading the book.

If Oliver's sons are nearly grown, this means it's, what, 16-17 years later? I was hoping for something like 5 years later. Mr. Chalamet does NOT look like he's in his 30s so I'm a bit confused, but maybe by the time they film (if they do indeed get around to it) it'll be okay? I don't know. I'm still definitely intrigued.

I agree with others here, especially Sarah: the love and affection between Elio's parents and their concern for him was a great part of the appeal of the film. Also, I was charmed by Amira Casar's performance, her beauty and subtlety. I think that breaking that bond is a mistake, but it's Aciman's conception to do with as he sees fit, alas.