This is The End, My Only Friend, The End

How do we save the world? I mean literally -- the world is actually crumbling. So how does one person, you or I or a substitute teacher in Germany or some choir leader in Iceland, grab ahold of the apocalypse, twist it where it stands, slap it on its bottom, and point it off in the other direction? Do we go epic a la a Michael Bay movie and send rocket-ships loaded with atomic bombs to avert our doom? Or do we plan micro and be affectionate, eat our greens, pay it forward person to person and hope its kindness that spreads like the plague and not, you know, the plague spreading like the plague?

That question is at the heart of Benedikt Erlingsson's one-of-a-kind Woman At War, out in theaters this weekend -- at film's midpoint it's literally posed as the conversation between Halla (a phenomenal Halldóra Geirharðsdóttir) and her twin sister (also played by Geirharðsdóttir). What do you do? Do you go out and commit daring feats of extravagant eco-terrorism derring-do, toppling the system itself and returning us to the earth, the dirt, the endless fields of Icelandic moss from whence our once-cousins rose? Or do you adopt a child from a horrible war-torn place and show her the love she's been denied in this world, one to one?

Woman at War has a lot of fun with the former, giving us a Nordic actioner of hyper-colored goofs, James Bond with tuba instrumentation, while the latter smaller-scale possibility -- a girl so glum-faced she provides her own dour soundtrack -- hangs over the film like a cartoon rain-cloud. It's hard not to side with the showy Crush Capitalism antics, the bouncing and bounding and steel bow-hunt of it all, even though we, and Halla, oughta know better. We are, after all, only human. One human. In a churning fire-storm of sludge. Shoot them arrows off. 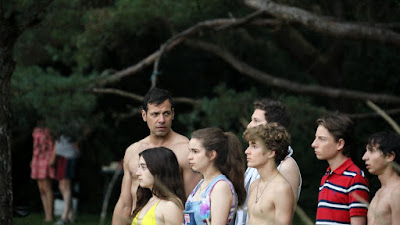 And, manifesting a theme, the same specter of globalist doom also pervades every square inch of Sébastien Marnier's film School's Out (which is playing at FSLC's series "Rendez-vous with French Cinema" next week) -- the elite school that Pierre (Laurent Lafitte) has come to substitute teach at hangs under the shadow of a nuclear power plant, whose hum fills the air and the soundtrack; the kids that he teaches, way too smart for their own good, are struck dumb by the future which unfolds like storm clouds on the horizon.

In both films the children are (as a wise woman once said) our future, but seeing as how our future seems like a terrifying question mark at this point in time, it runs with that -- their faces turn toward us blank as a Magritte painting, a rain of poisoned frogs from the heavens, asking what we have done, what will we do, what are we willing to manifest in their defense? Or should they do the fighting for us? A horror yawns open; the animals act strangely -- the dog won't stop barking and feral cats romp in every direction. Bushes seem a mite too green and the sky a wash too yellow -- this is twister weather; static electricity streams from our fingertips.

Woman at War and School's Out both see us wild-eyed, wrangling with environmental cataclysm -- person to person to person, our every step and whisper shot through with helplessness in the face of a monumental horror humming on the horizon, the street corner, in the immediate window frame and climbing inside our heads. A flood is coming, friend-o -- put on your waders, wring out your friend's hands, and batten down for business.
.
Who? Jason Adams When? 3:08 PM