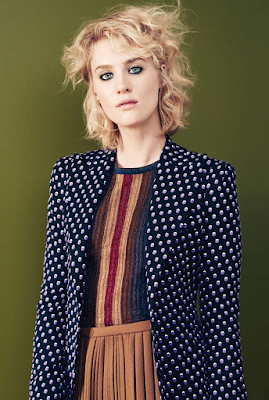 I say this every time I see her in anything -- and I see her in a lot of things because it's at the point where I will watch anything she is in, I love her so -- but Mackenzie Davis is always the best thing about whatever she's in. She had fierce competition for that title in Halt and Catch Fire (sigh, I still miss Halt and Catch Fire every single day, you guys) against her three co-leads but her Cameron Howe was always aggressively complicated, going against every expectation you'd make - Davis kept finding ways to make you crazy fascinated with her after four seasons and endless time-leaps; decades of intimate human discovery buried under a hundred attention-grabbing hair-dos. She is, and I don't use this phrase lightly, the bee's knees.

So imagine my reaction upon reading last night's news that Mackenzie's set to star in a rom-com opposite Kristen Stewart! As in they are the ones rom-comming, together. it was something like fireworks... hell, it was as good as the sex scene in The Hunger, you guys. The movie's called Happiest Season and it's directed by ever-talented actress Clea Duvall (I hope she shows up on Veep this season still) and it sounds kind of like a lesbian Birdcage, in that it's about a woman planning on proposing marriage to her girlfriend over the holidays only to find out on an in-law holiday-trip that said girlfriend hasn't come out to her conservative parents yet. I'm not sure if it will involve Kristen Stewart going full Drag King directly a la The Birdcage or anything, I have my doubts on that matter, but who knows? Crazier shit's happened, y'all.
.
Who? Jason Adams When? 11:54 AM