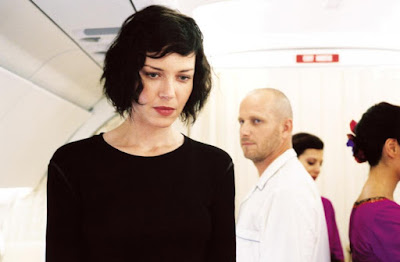 Diane de Monx: You didn't see anything.
No one sees anything. Ever. They watch...
But they don't understand.

Today is the 64th birthday of the director and genius Olivier Assayas (every year his birthday rolls around I'm like, "What, he is how old? How?") and this gives me a fine opportunity to mention two things. One, I can't believe I still haven't watched Demonlover! Note to self: "Hey you! Watch Demonlover already!" 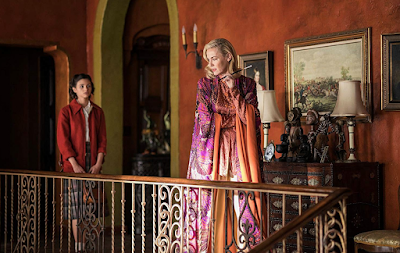 And two, Demonlover stars Connie Nielsen, and Connie Nielson has what I consider the juiciest most memorable role in the TV series called I Am the Night that's premiering on TNT this weekend. I've been telling you about this series since last summer when the first trailer premiered - it stars Chris Pine as a drunken detective type in 1960s Hollywood and delves into the infamous "Black Dahlia" murder. Nielsen plays a wealthy artist with a penchant for caftans and cigarette holders (as pictured above) and has my single favorite scene in the entire run of six episodes, involving one of her "art pieces." It is to die for. Every time Nielsen's on-screen is gold.

The show (which reunites Pine with his Wonder Woman director Patty Jenkins and reunites Jenkins with her Monster milieu of horrific murder) is maybe now and then a little derivative of True Detective's first season and lead actress India Eisley feels a little green at times, but I still recommend giving the show a shot -- despite her greenness  (or maybe because of it) I actually came to like Eisley a lot by the end, and there are moment when Jenkins investigates Ye Olde Tale of Men Killing Women in unexpected ways. Not to mention there's always this...
.

Pine is technically my least fave of the Chrises but I don't know how to reconcile that with him having the best ass of the bunch pic.twitter.com/gmyW4WL6aM
— Jason Adams (@JAMNPP) December 21, 2018

I've definitely come around on Pine. With Into the Woods, Hell or High Water and Wonder Woman, he gave three fantastic performances, calibrating each to the movie's genre and making it look easy. I mean, him singing "Agony" in Into the Woods - who knew he had that goofiness in him?

I have to add that Chris Pratt has most certainly now fallen into a distant last place on The Chris Scale, given his religious nuttery