When I did my great big gratuitous post on the 50s and 60s beefcake cowboy Guy Madison for his birthday in 2017 (and not coincidentally it's his birthday again this weekend) I posted a couple of gifs...

... from a super homoerotic bathtub scene he shared with fellow thespian (and rumored fling) Rory Calhoun in the 1949 Western called Massacre River. Only the scene...

... is so resplendent that it really doesn't seem right leaving it at that. Especially now that I found a slightly better copy of the movie on YouTube with which to gif it - those old gifs were real poor like. Much like Guy Madison beside that bathtub...

... that won't stand. Before we get to all the gifs though I'll add that this post was inspired by a viewing of Sergio Leone's 1961 sword-and-sandal pic The Colossus of Rhodes this past weekend via TCM, which stars Rory as... oh who cares, the movie's pretty boring, and Rory... 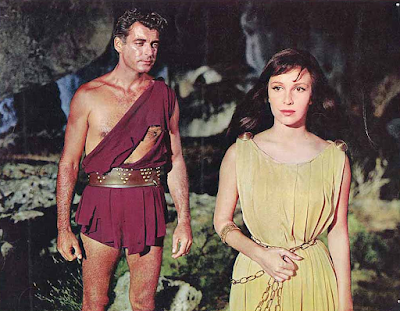 ... is ever so slightly too old in 1961 to pull off the ultra short skirts they have him rocking. But no matter, since we'll always have him and Guy wrestling in a soapy bathtub built for one in Massacre River. Speaking of, lil' doggy, let's hit the jump for more of that...

One has to admire how unintentionally (or not) homoerotic many of these Hays Code-era movies really are.

Both so pretty! Thanks for the link to the film, I had some drudgery to accomplish today and watching these two in a not bad (though nothing special) Western certainly eased the chores.

So gorgeous. He certainly is spending a lot of time washing his wrist...?

And where exactly is that guy grabbing the soldier to throw him out? It's way too low to be his belt. It looks much more...personal...than that.