Neely O'Hara: Ted Casablanca says
he's the joke of the town.
Jennifer North: I wouldn't pay any attention to that.
You know how bitchy fags can be!

The late great Sharon Tate was born on this day in 1943 - just 26 years later she'd become the face of a tragedy that should've stayed nothing to do with her; in a happier timeline she's turning 76 today with a lifetime of perfectly pleasant credits behind her. I'm morbidly curious to see what Quentin Tarantino does with her as a character (played by Margot Robbie, see below) in his next film Once Upon a Time in Hollywood - I've mentioned this before but part of me is hoping that if he has to tell this story at all (and I kind of wish he wouldn't) that he goes the "change history" route that he took with killing Hitler in Inglourious Basterds and he lets Sharon live. 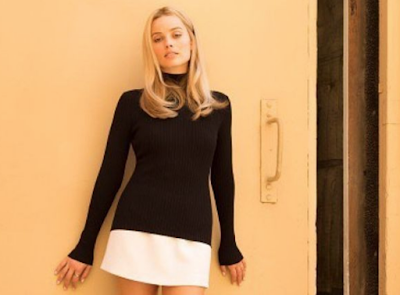 Such a beautiful woman, apparently a sweet and gentle creature and a horrendous tragedy. Watching her few films she positively glows on screen and based on her fun performance in The Wrecking Crew she was an able, facile comedienne.

I've read that Tarantino met with Sharon's sister Debra Tate and assuaged her many concerns about how he dealt with the event....we'll have to wait to see if he was talking through his hat but it made me a little bit more hopeful he'll deal with it with the dignity Sharon and the others are entitled too.