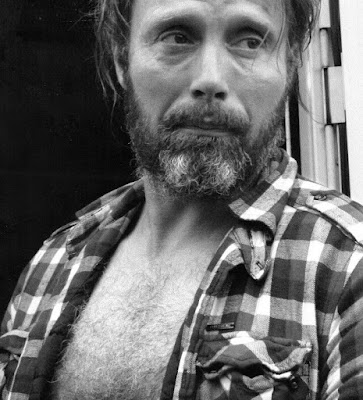 It became kind of a joke a couple weeks back when trailers were released for two ostensibly different Mads Mikkelsen thrillers that are about Mads Mikkelsen being trapped in a winter hell-scape, one called Arctic and the other called Polar. Arctic is a survival story (in theaters on February 1st) that has him finding a woman whose helicopter crashed upon yonder tundra...
.
.

... while Polar (which hits Netflix tomorrow) is an over-the-top actioner; an adaptation of a series of graphic novels about an eye-patched wind-swept assassin. And here's that trailer:
.
.
I have to admit I hadn't even realized these were two different movies until I read earlier this week this quote from Mads in an interview with BD:

"In more intense moments, Mikkelsen has to take out armies of attackers barehanded, and bare-assed. A long action sequence occurs with Duncan in a state of undress, making it far more brutal on the actor than his big studio blockbusters. “Doctor Strange was also going on for days,” Mikkelsen said. “I had a fight with Benedict Cumberbatch that was also quite a big thing. The difference was that I could be padded on my elbows and my knees on that film. I could not on this one. I was literally not wearing any clothes meaning that I would have to fall on my elbow on a concrete wall. That’s a different ball game.”" 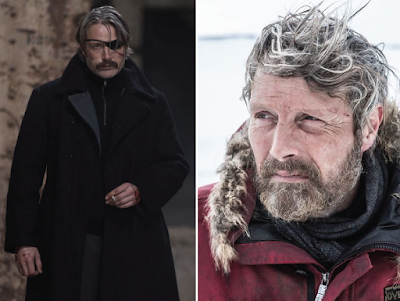 Is the coldest month of the year really a great time to release competing movies about people freezing in the ice and snow?

Me, I'm waiting for Liam Neeson's "Cold Pursuit", which is a remake of Stellan Skarsgård's Norwegian black comedy, "In Order of Disappearance", which is on Netflix, and which is a pure delight.

"Cold Pursuit" will open on 8 February 2019, and I think I need a hot chocolate.

A present is more fun when you have to unwrap it.

I just want Mads back as Hannibal Lecter

I tried watching Polar. It was so awful I bailed before "In more intense moments, Mikkelsen has to take out armies of attackers barehanded, and bare-assed.", which is sad. There seemed to be a rather interesting slow, melancholy, thriller going on somewhere in the plot, but only 2 of the actors were in that movie, everyone else was doing dumb shlockfest panto - and I don’t mean that in a good way!