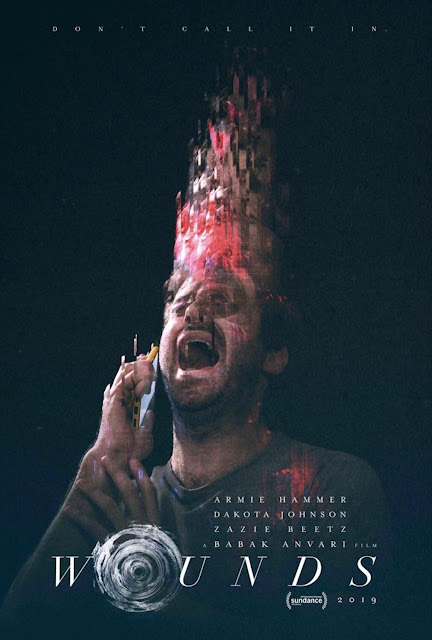 A little Sunday morning pick-us-up! The poster for Wounds, Armie Hammer and Dakota Johnson's forthcoming horror film -- I had up until now been calling it a thriller but given that poster I now feel safe saying horror, I mean clearly -- is here, the film having just debuted at Sundance late last night. The film was directed by Babak Anvari, the man who gave us the very good Iranian horror film Under the Shadow (read my review of that here). The poster is very Scanners, no?

Anyway also debuting at Sundance last night -- Armie Hammer skittering all around Park City placing fake cockroaches on everything. It's apparently a reference to the movie, and a tweet I read looking around for reactiona confirmed bugs are prevalent, so, you know, I am fucking terrified of watching this movie now. Bugs are my number one HELL NO trigger. You haven't lived until you've seen me in the same room as an insect, you guys -- it's really something.
.
Who? Jason Adams When? 9:51 AM

You wouldn't let Armie put a bug on you? Not even a cute butterfly or ladybug? If you only knew all the insects that were around you all the time, you'd freak out.