A Goldmine of Velvet 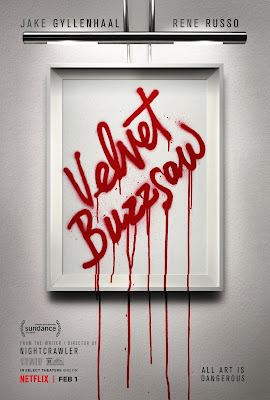 It's only eleven days until we gets to see Velvet Buzzsaw, the satiric art-world horror flick reuniting the team behind Nightcrawler, aka Jake Gyllenhaal and Rene Russo and writer-director Dan Gilroy, and they're really kicking up the PR blitz now - after the other week's trailer (watch it here), not to mention last week's whispers that Jake is going gay again, we've now got that poster above (thx Mac), and Netflix has also finally added the film's page to their website so you can actually add it to your list now, huzzah! Once Midnight February 1st rolls around you wouldn't want to have to wait the time it would take to click, would you? Now you can spare yourself all that. 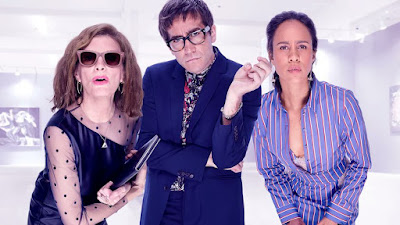 The new web-page also gives us these two new promo images of Jake and Rene and Zawe Ashton on the right there in character; Ashton was featured in a previous promo photo for the film (see it here) and when I posted that it reminded me that I hadn't watched Wanderlust yet since Ashton co-stars in that Netflix series alongside Buzzsaw's not-pictured-here co-star one Toni Collette, and also Wanderlust was created by playwright Nick Payne, who's written most of the plays that Jake has done on Broadway. God, that's a convoluted web of connections. Anyway I bring all that up because I watched all of Wanderlust this weekend, and it's really fucking great, and you should watch it. Right, Rene? 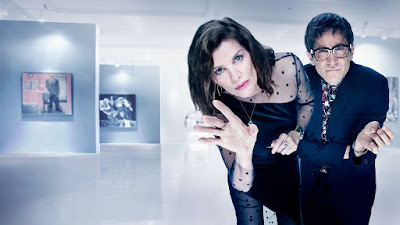 Zawe Ashton is GREAT in Wanderlust. I mean, obviously I adore The Great Queen Toni Collette, but at the same time I totally get her fictional husband in Wanderlust when he falls for Zawe.