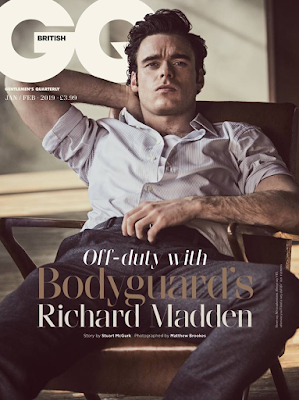 That is a hot picture, but damn all that font. Anyway there's a really funny video attached to Richard Madden's new photo-shoot, seen here, for British GQ, in which they force him to watch the so-called "Red Wedding" scene from A Game of Thrones while all done up like a pretty princess in his turtlenecked refinery. I was amused, anyway. They dolled him up and then forced him to make a pregnant lady get butchered about the belly! What a lark! 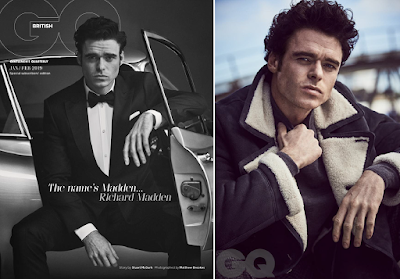 Anyway the only snippet of the interview online so far is that and then what he has to say about the ever-present Bond rumors - do you guys think Richard would make a good Next Bond? I think he probably would. And this photo-shoot is sure as fuck trying to make us feel that way, at least. Have I been brainwashed? Probably. But at least we'll get another Bond totally cool with the man-on-man. That scene in Skyfall between Dan Craig and Javi Bardem didn't go nearly far enough. 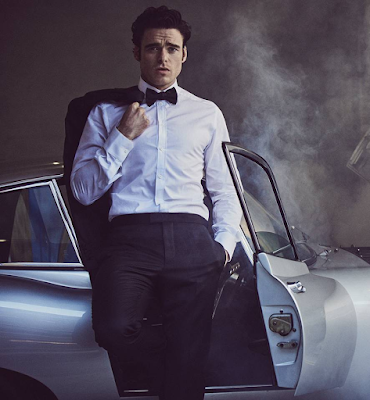 Oh Christ he's handsome - and that voice and accent! The Bodyguard was worth watching, and not just for Richard Madden.

Love this man! He's been terrific in everything from Bodyguard to Klondike to Romeo and Juliet. And let's not forget about 'those pants' in Cinderella! PLUS that Scottish accent makes me SWOON!

I haven't seen him anything (although I swore he was on "Downton Abbey" until I looked up his filmography, he just looks like the kind of handsome white guy that show employed by the dozens), so I can't say for sure about him as Bond, but I'd love to see Henry Golding given the chance.

No more Bond! Surely he can do something better with his career than acting in outdated sexist (and more crucially, getting very boring) nonsense?! Seriously, let’s write something fresh and not rehash a franchise well beyond its sell by date. Mmm ... I think my high horse is showing ...!