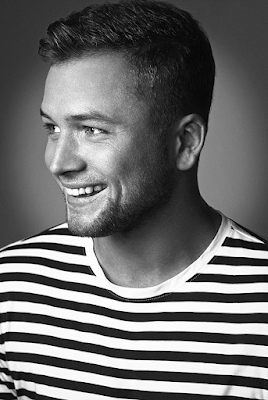 "I think the film feels like something that the gay community especially can really take ownership of. I really threw myself into it. I filmed my first sex scene for this film and it was... [smiles] I feel that the movie we've shot is really a celebration of everything that Elton John is and part of that is his sexuality and I think when it comes out I actually think the gay community will be quite surprised by quite how it appeals... I've loved every second of it. I'm not someone who is remotely perturbed by male intimacy, and I'm quite proud of what we've done in it. We really went to some places with it."

That's Taron Egerton talking Rocketman with MTV last week - you can watch the video right here. (I transcribed his quote from that, hence it being kinda rambling.) He also calls Jamie Dornan "lush" at one point, I liked that. Oh and please do keep in mind that as we previously noted the "sex scene" Taron speaks of is with Richard Madden, as well....

That is important to remember at this juncture. Anyway yes Taron just recently came out as "not gay" after everybody read one of his Instagram posts as being super duper gay... but hey, that leaves the door open for bi, right? Here's exactly what he said:

"One of the lads was at my London flat and I Instagrammed a picture of him and said ‘Look at this cutie’, and a million outlets reported I was coming out as gay...I’m not gay but two of my mates came out when I was 15 and it was a joy to support them because, as a group, we are all secure in who we are... I’m certainly not going to stop calling my mates cuties and gorgeous, because they are cuties and they are gorgeous."


I'm still not able to work myself up into a frenzy about two "not gay" actors playing homosexuals in a movie, even in the wake of the homophobic spectacle that was Bohemian Rhapsody, which yes, was at least partially directed by the same man directing Rocketman, Dexter Fletcher. And speaking of not gay gayness, Egerton made that Eddie the Eagle movie with Fletcher a couple years back, which gifted the internet with this non-stop spectacle...

Anyway I remain hopeful that Elton John's hands-on (heh, no doubt) involvement with Rocketman will lead to it being a much more actively and importantly happily gay experience than Rhapsody did witout Freddie Mercury around to set the record straight, or rather, the opposite of straight. I have enjoyed the Rocketman trailers, the most recent one even more so, and speaking of here, since I don't think I ever posted it, let's watch it and get some Elton stuck in our heads all day:
.

It is obvious from those involved this will be next year's non warts and all Bohemian Rhapsody,we are going to be getting 1 a year if the internet is to be believed Dusty,Amy,Whitney,Kurt etc.

I've read that Elton John had had a gag order on his ex-wife which meant she can't say anything about their marriage/divorce unless she wants to be sued. In light of that, I reckon that period in his life may just be glossed over in this upcoming movie.