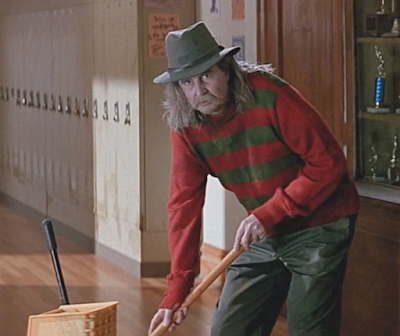 I know, I know, I already used Wes Craven's Scream once for this series - it's a bit of an overkill to double-dip. (See our ode to Deputy Dewey right here.) But once it occurred to me I could hardly be expected to resist Craven's self-referential cameo playing a high school janitor named Fred with a penchant for familiar knit-wear...

"No running in the hallway."

Wes is of course referencing the scene in original Nightmare on Elm Street where Nancy falls asleep in class and bumps into a diabolically-inclined hall-monitor, which leads to one of my favorite lines of dialogue in a movie full of great quotable lines, namely... 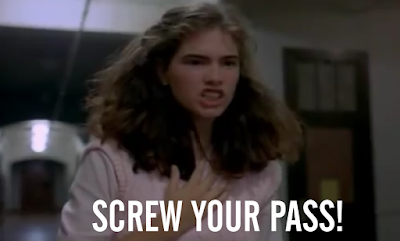 Giving himself a cameo in the film, even as another character, also feels like a shout-out to Craven's New Nightmare movie, in which he played himself, blaming himself for unleashing a monster - that's probably too much to read into the cameo though since Craven gave himself cameos in several of his movies; he was in Shocker and Red Eye and all of the Screams... although his bit as a coroner in the fourth one got cut from the final product. You can see it here:
.
.
Anyway "Fred the Janitor" in the first Scream is my favorite of his cameos and clearly the best - he pops up in the scene where the Principal (played by the Fonz, aka Henry Winkler) is being stalked by Ghostface in the school as a red (and green striped) herring...

Honestly I've always hated this murder and found it dumb and gratuitous but I guess that's the point - these are dumb and gratuitous high school boys doing the killing (uhhh I guess spoiler, but come on, the movie is 22 years old now) and these lunkheads would totally murder their principal just cuz. And at least the scene gives us Fred!

Click here for all of our 13 Mustaches,
and Happy Halloween, everyone!
.
Who? Jason Adams When? 12:46 PM