Gale: Is there a problem on campus?

Dewey: No. Everything's under control.

Gale: Well, of course. You're here.

Dewey: You're not supposed to be here.

Gale: I know. I should be in New York covering
the Sharon Stone stalker, but who knew?
You look awfully young to be a police officer.

Gale: You know, in a demographic study, I proved to be
most popular amongst males 11 to 24. I guess I just missed
you. Of course, you don't look a day over 12. Except in that...

... upper torso area.
Does the force require you to work out?

Dewey: No, ma'am. 'Cause of my boyish good looks, muscle mass
has increased my acceptance as a serious police officer.

I mean can you even with these two? The palpable chemistry between them was a huge part of what made Scream work, and I mean all four films -- no scenes were scarier to me then the ones where Wes Craven put one or the other (or them both) in danger. The thought of Gale or Dewey having to see the other one murdered was always too much to bear, and remained that way for every single sequel. I'm so happy Wes insisted they have a happy ending. 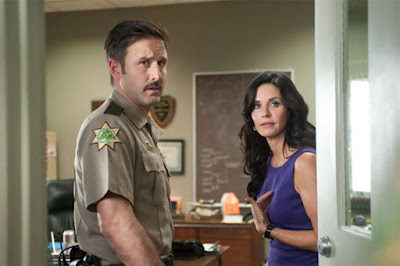 Anyway I chose that scene for this here holiday tribute to horror mustaches because of what a stroke of genius Dewey's Stache was in undercutting all of his Adult Man Posturing - that mustache makes David Arquette look unfailingly adorably goofy, and in its strain towards Man Stuff actually makes him look more like a little boy.

He was so cute at that point in time!