I could fill this series a thousand entries strong by just posting about Errol Flynn's mustaches over the years but today, in honor of the 109th anniversary of his birth, let's focus in on the 1939 Western called Dodge City, which was one of the biggest hits at the movies that year and yet you don't hear much about it anymore. It was the seventh time that Flynn co-starred with Olivia De Havilland (out of eight films they made together) -- here's a clip that showcases why the two were so popular (as well as showcasing Errol Flynn in pretty tight cowboy trousers):
.


.
Dodge City was directed by Flynn's frequent collaborator, the psychotically paced director Michael Curtiz - Dodge is wedged right between The Adventures of Robin Hood in '38 and The Private Lives of Elizabeth & Essex later in '39, which I consider probably Flynn's two most important films. That said I never hear anybody talk about DC nor have I seen it myself - of course I'm not the world's biggest connoisseur of Westerns, my least favorite genre give or take a couple grand exceptions. If you've seen it how does it stack up? 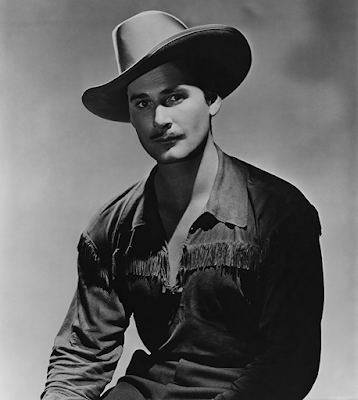 OOOOOO I LOVE Dodge City!!! It is odd its not as renowned as many Westerns but its a big colorful rollicking adventure with both Errol and Olivia at their peaks.

The fact that Flynn speaks in his particular blend of Australian, British and American melded accent in the heart of Kansas is never explained but as with all his films you just have to roll with it. He's so dynamic it doesn't matter anyway. Olivia wasn't happy about being cast in it after GWTW but her character Abby is a flinty headstrong girl who gives as good as she gets from Flynn so it's not a bad follow up. This is tied with Robin Hood as my favorite among Flynn films.

It also has Ann Sheridan working her way up, she was almost there this was her last true supporting role before she became an above the title star, a delightful pair of sidekicks for Flynn in Alan Hale and Guinn "Big Boy" Williams, a very youthful and beautiful William Lundigan (though his appearance is brief) and a whole raft of the Warners stock company adding lots of brio to the picture.

Master of all genres Curtiz keeps it moving and entertaining at a terrific pace and the color photography is fantastic.

While I'm here these are my top 10 Flynn films more or less in order:

Bonus: There's also Footsteps in the Dark a fun atypical role for him as mystery writer who likes to solve crimes slanted to a comic edge.

Wait, Dodge City was the biggest hit of 1939? What about Gone with the Wind?

Shoot I typo'd myself. I was messing around with that sentence and didn't notice. Obviously not THE biggest hit, I will fix that. ;)

Eleven movies? Buddy, they only did eight. (Well, nine if you count their cameos in Thank Your Lucky Stars, even though they shared no screen time together.) I know this because I wrote about them for de Havilland's 100th birthday a few years back.

Damn Wikipedia, lying to me. Thanks for the heads-up, I'll correct that :)