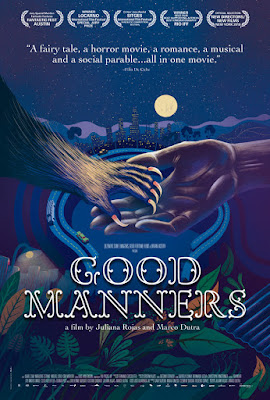 I have terrific news for any of you who like horror movies, or good movies, or good horror movies, or interesting foreign films, or interesting films, or musicals, or good interesting foreign horror musical fables about lesbian werewolves - boy have I ever got good news for the folks that fall into that last grouping since I am pretty sure that until now you've been criminally under-served. The Brazilian film Good Manners is all of those things and it is getting a U.S. release! It's opening here in NYC on July 27th and then a couple weeks later in LA, with more cities they say to follow. The film follows a poor nurse hired to be a wealthy woman's nanny, and then the full moon comes and things get weird real fast... 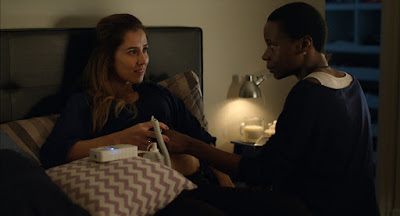 I saw the film when the Film Society of Lincoln Center screened it as part of their "New Directors / New Films" series earlier this year - I just never got a chance to review it because that screening was right in the middle of the Tribeca Film Festival and I was bonkers busy. But it's excellent - totally unique, and unforgettable. You are not going to want to miss this one! Here's the trailer...
.

I saw it at a festival back in April and want to echo the love. It's really something special and I need more in the genre of "Brazilian Werewolf lesbian horror musical."

Marjorie Estiano, who is one of the leads, is quite famous here in Brazil, from her TV work - starting as a Avril Lavigne rip off from all things. She is excellent in general, but in this she took a pig plunge - plus a big chance given she's a name. Kudos for her