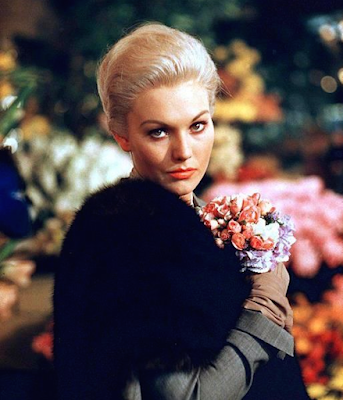 Today is the 60th anniversary of Vertigo, a big ol' flop that's now considered the greatest movie ever made. I've posted about the movie so much here over the years that I wasn't really sure what else I had to say but then a question struck me - what if somebody had the Carlotta  Valdes cajones to remake it today? Let's set aside our gasps of horror for five seconds and let's dream cast the movie with today's actors. Just cuz!

For the record I would cast
Michael Fassbender and Carey Mulligan.
They should be our high priests of self-hate.
Who would you cast?
.
Who? Jason Adams When? 1:31 PM

First, yes let no one entertain such a fool's errand as to try another pass at the film. But those are interesting suggestions.

For Kim's part it would have to be Charlize Theron though. She has that cool, removed quality that Kim possessed. For Jimmy Stewart's part that's a tougher call....maybe Daniel Craig.

Or younger (cause Hollywood is all about the younger)

I kind of think Daniel Craig would be perfect for this. Or maybe Jason Isaacs or Andrew Buchan instead (don't know why I'm thinking of English actors)?

For Kim's part - no idea. Face and mystery would be central. Maybe Amanda Seyfried? Or Nora Zehetner? Or Natalie Dormer?

And who could be grounded, wise, hilarious Midge? Barbara Bel Geddes was wonderful.

I love that you mentioned Amanda Seyfried, Scott - I almost said her. I think she could do it.