Next year May 4th will mark the 90th anniversary of Audrey Hepburn's birth but for now we'll just have to make due with eighty-nine - so let's make due with another bookstore scene from Stanley Donen's Funny Face then! Like the musical number from the film that we previously used for this series this scene is set in Audrey's character's "sinister looking" Greenwich Village book-shop hysterically titled "Embryo Concepts." 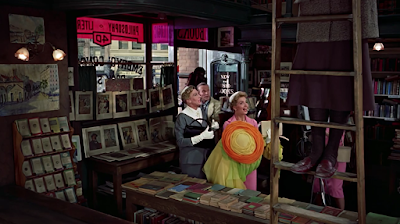 You can see the name written on the glass there - according to the ever-handy "Movie Locations" site this wasn't shot in New York but was all done on a soundstage in Hollywood. Honestly they fooled me! I really thought it was a bookshop I'd been in once here. 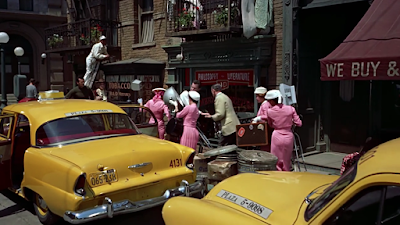 Anyway you can watch this entire scene over here - it's a really very funny and loving and gently mocking tribute to the beautiful work of Richard Avedon, who was the basis for Fred Astaire's character named "Dick Avery." This model cracks me up:

One of my favorites ever! Isabuchi!