Napoleon: Take it like a pussy.
Illya: This is NOT the Russian way.

I quite like that bit of dialogue between Henry Cavill & Armie Hammer totally divorced from its context, don't you? Context tends to ruin so many wonderful things. Anyway I feel as if I've been hearing people talk about this movie a whole lot lately, and randomly at that... 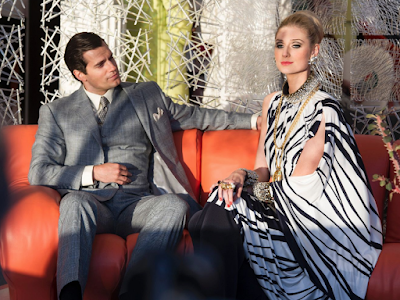 ... is it finally developing a right and proper cult? I thought it was fun but I wasn't quite as enthusiastic about it as some critics I know were. It might be due a re-watch now that CMBYN went and made me an enthusiastic die-hard Armie fan though - perhaps I'll like it even more in that (here we go again) context. What do you guys think of the movie?

Oh and happy birthday to Henry Cavill tomorrow.
.
Who? Jason Adams When? 12:27 PM

I had so much fun watching this movie. It's light and unpretentious. And looking at Armie and Henry didn't hurt a but. I would love a sequel.

I really enjoyed it. The clothes and settings were super cool, Henry, Armie and Alicia had very good chemistry and the supporting cast was terrific.

One thing I really liked about it was that when they fought or were involved in a chase afterwards they were bruised and bandaged, true very glamorously damaged but still unlike so many action movies they weren't super human. It even had a good story.

I would love to see a sequel but I don't think it did well enough for that.

I know it's not the popular opinion, but i am actually a huge Guy Ritchie fan. I love all of his movies and this one is not the exception.

I loved it from day one. It's fun, exciting, glamorous. Everyone seems to be having a great time. The fashion is spot on. The soundtrack is flawless!
I do have ONE complaint: I strongly feel there was the need for a tussle between Illya and Napoleon in a Turkish sauna. Am I wrong?

I loved this film! It's stylish, action-packed, well acted and directed. The main thing is the film's sense of humor. I'd Love a sequel.

Whenever most people say it's a 'stylish' movie, they're almost always talking about the female characters' costumes. The menswear here sucked but I guess that makes it authentic.

I love this movie unabashedly! The soundtrack is stellar, a perfect homage to Mancini's work for Arabesque and Charade.