The Marrowbone's Connected to the... 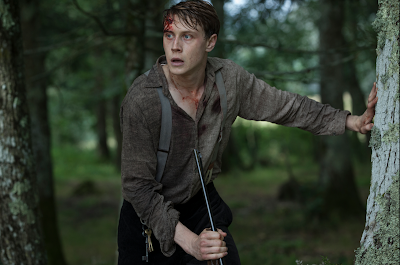 I spent half of its runtime convinced that Marrowbone was a remake of a foreign-language film that I had seen before, but it just turns out that the film is so cobbled together from scraps it can't help but feel like a warm hat just worn. It tells the story of a bunch of siblings orphaned inside a big creaky country-house who try to keep to themselves but the outside world just won't stop barging in - you're never quite sure with these stories whether the danger is from the invading outside world or if it's from the interiorized one trying to protect itself, and sure enough that tension's the juice running through this clackering, clanking booby-trap of a picture.

I might be coming off more dismissive than I intend - Marrowbone has a really lovely cast of up-and-comers including Anya Taylor-Joy and George MacKay and Mia Goth (I called attention to them when I posted the trailer a few weeks ago). They sell what they're handed well enough. And there are some nicely drawn out scares of the bumpy jumpy kind that we totally see coming, with surprise spooky hands entering the frame and the like, that nevertheless feed the hunger we long to feed with seeing a movie like this. It looks very fine, the period details are beautifully drawn.

So if I come across as more dismissive than I intend perhaps it's the grossly miscalculated final moments of the film, which I won't spoil but which left me with an unhappy flavor turning over in my maw. Bad endings have a diabolical way of straining all the good out of your head. Oh well. Anyway it's nothing you haven't seen before and sometimes that's enough for one-hundred-and-ten minutes of distraction slash entertainment. It had me for about one hundred.


Marrowbone is in theaters & on demand this weekend.
Here is the trailer in case you missed it before:
.