To the Marrow Borne 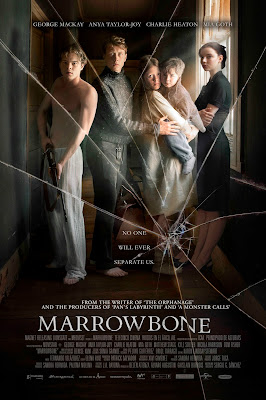 Did any of you watch The Ritual on Netflix this weekend? Here's my review of that if you missed it - it's not a bad time for horror movie enthusiasts right now! We already had that, we've got the much-hyped Hereditary hitting in June, and here's something else - Marrowbone is from the writer of The Orphanage and stars a killer cast of up-and-comers including The Witch star Anya Taylor-Joy... which is already plenty to sell me, I am sold. But it's also got George McKay from Captain Fantastic (and also Pride, which I loved him in) and Charlie Heaton from Stranger Things (who is for some reason half-naked on the poster seen up top, not that we're complaining). Here's the trailer:
.

.
The star of that trailer is Mia Goth's terrified face, right?
She's perrrrrrrrfect for this kind of movie.

I love a good "kids left to care of themselves" horror flick!
Marrowbone hits theaters and on-demand on April 13th!
.
Who? Jason Adams When? 12:50 PM

I try not to watch too many trailers for horror films (the WORST genre for trailers since they tend to give away everything) but I like the cast for this one. Saw "The Ritual" on your recommendation. It was satisfying and I enjoyed it even though I could count every film it 'borrows' from ("Yep, there's Blair Witch, and there's King Kong, and there's The Hills Have Eyes, etc).