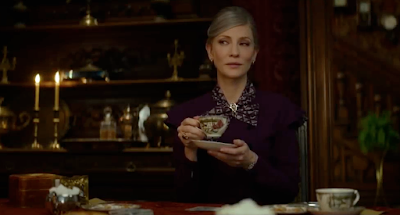 June of last year was when we first heard that Eli Roth, the director who eviscerated a naked Dawn Weiner on screen that one time, was making a kiddie movie called The House With a Clock in its Walls. We didn't actually know how kiddie it was going to be at the time since it's an adaptation of a book (written by John Bellairs) that was illustrated by Edward Gorey and Gorey, though juvenile, runs dark. But the trailer for the film, just released, makes it clear this is Eli's big-screen Goosebumps by way of A Series of Unfortunate Events. Oh and it stars Cate Blanchett, of all people. Watch:
.
.
Did any of you bother seeing Eli's recently-released and (apparently) controversial Death Wish remake? I heard all the hullabaloo about the film seeming pro-gun but mostly ignored it because I knew I'd never watch the movie the second I saw the trailer and realized that the plot hinged on Elisabeth Shue getting brutally murdered - I have a fine stomach for most violence but there are some lines I can't cross and my beloved Elisbaeth Shue being hurt is one of them. I have absolutely no desire to ever see Elisabeth Shue, girl of my teenage dreams, ever get murdered on screen. Can't do it!

Anyway The House with a Clock in its Walls
is out on September 21st.What do we think?
.
Who? Jason Adams When? 12:50 PM

Adrian C said...
This comment has been removed by the author.
8:18 PM

7 year old me loved this book (and some sequels maybe...?) so I'm totally there for it. Looks like "Young Sherlock Holmes" visits the "Monster House".

I did see Death Wish. It was pretty good, I love the Willis, watch Die Hard at least once every year, usually at Nitehawk or Syndicated.