Greta Gerwig is on the cover of TIME Magazine 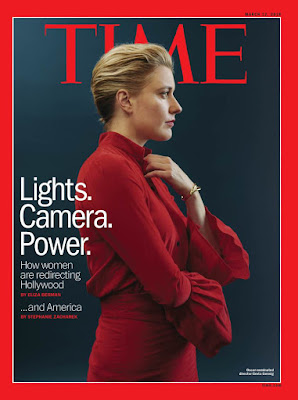 If I told you that two tears, one from each eye, literally sprang out and ran silently down each cheek as I looked proudly at this magazine cover, would you be embarrassed for me? I know my boyfriend is closing his computer screen right now and shaking his head. But I don't care! It's true, dammit! I've been with Greta since way way back - battling through Mumblecore Indies and remakes of Arthur alike - and to see the astonishment I always knew she'd be come this astonishingly to fruition? It feels lovely, and I am proud of my girl. Y'all just wish you felt this much!

I went back through our archives and found my very first post on GG - it was my 2009 review of Ti West's film House of the Devil, as I knew it was going to be. When I did my "Moment I fell For" post on her sure enough it was during that film. I had actually seen her in the movie Baghead earlier that same year but I never reviewed that movie - if I had I would've made mention of her because I remember her striking me as an interesting presence from the second I laid eyes on her.

That's not just me spinning rosy backwards fictions either - in my 2009 year-end awards I said as much. Here's what I said about why I was immediately obsessed with her:

"Because her every scene in The House of the Devil is a complete delight, until it's a shuddering horror. And because she was every inch as delightful in Baghead earlier in the year. She needs one more, a Terror Train, and she's total Scream Queen material, but in a hipstery way we've never had before (and no, "hipster" is not a dirty word to me, so eff off with that noise). I don't know that we'll get her Terror Train though because The Big Time appears to have taken notice and she's the only thing making me want to see Greenberg, the new Noah Baumbach movie with Ben Stiller. But she is totally enough on her own to make me see it (I'm not a big fan of Baumbach's previous films)."


Clearly I turned around on Baumbach, and who do you think's responsible? Greta is magic. She turns everything (even, almost, remakes of Arthur) into magic. Congrats, Greta. You deserve every single accolade and I always saw it in you. Stay true to that fierceness of character and smarts and emotional intelligence and there'll be no stopping you. FRANCES HA FOREVER!!!