Don't Tell Me The Babysitter's Dead 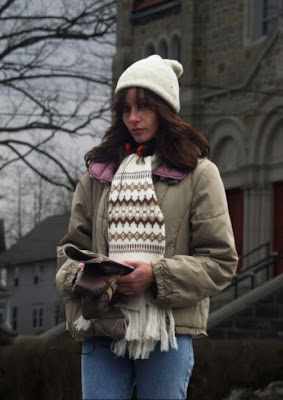 About half an hour into The House of the Devil not much had happened. Deliberately slow, fetishistically plotted, the film follows lead-girl Samantha (Jocelin Donahue) over the course of a single day as she tries to sort out her living and financial situation - she's got a nightmare roommate in the dorms and lucks into an apartment but isn't sure she can afford the rent - and generally mopes around, unsure what to do with herself.

So then there we are, half an hour in, we've gotten to know Samantha, along with her best pal Megan (Greta Gerwig), and the plot's beginning to move forward - Samantha's gotten hired for a slightly suspicious baby-sitting gig out in the middle of nowhere that will miraculously aid her in affording her new apartment - when I realized that oh my god I really like these girls, and I don't want them going out there, I don't want them stopping at that house, and I certainly do NOT want them going inside. NO! 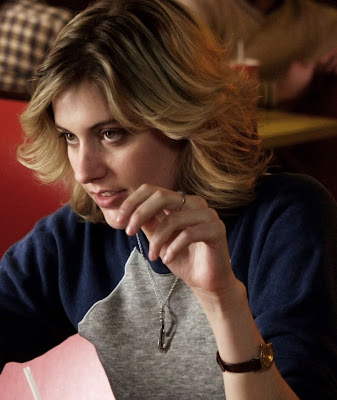 It's horrible that it doesn't happen often enough, but a whole heckuva lot of the time you're either indifferent to or just can't stand the protagonists in a horror film. I don't really need to go into detail there - y'all know what I'm talking about. So when it happens and you find a movie where the characters are likable and relatable, and you know No Good is coming their way - maybe the movie is called House of the Devil, for example, and that sorta portends doom all on its own - well it's just thrilling. It's horrible and it's thrilling and it's what you live for, as a genre fan.

You're torn. You're helpless. It's coming and you could turn the DVD off but you can't, not really. It's what you paid for. You've strapped yourself in for this specific ride. So you watch what's closing in on Samantha and Megan and you feel it all yourself. It hits that animal spot. Panic. 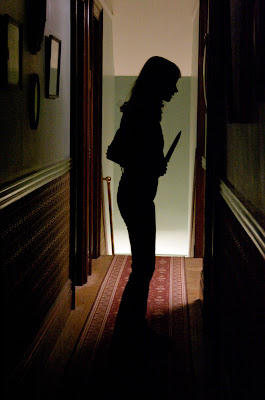 Ti West's The House of the Devil is a wonderful horror film. Well-shot and deliberately-paced and filled with genuinely sympathetic (and later, horrifically unsympathetic) characters, and a world that slowly methodically envelopes you. It's smart when it wants to riff on the genre and cunning when it wants to play it straight. It says a lot that it could borrow so mercilessly from Rosemary's Baby and not annoy me for that in the slightest. The camera only tells you what it wants to - we're left peering around the unfamiliar corners of claustrophobic hallways and out through windows into the dark eclipse-cast night, only wanting to look away, but unable. If only, we think. If only.
..
Who? Jason Adams When? 2:38 PM

One of the best horror films this year.