The Disappearance of Mike Vogel 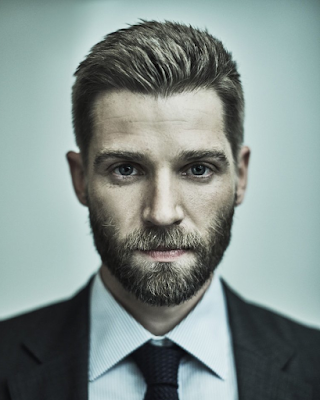 That title speaks not of Mike Vogel's professional career, which is doing just fine - most actors would kill to be starring on a brand new series on NBC that premieres in four days. I speak of his literal blink-and-you'll-miss-him moment in Battle of the Sexes, which I rambled a bit about in my review of the film yesterday. Honestly it strikes me that I should've saved it for a separate post, because I like and long for Mike Vogel in my life, so that's what I am doing now.

I just want you guys to keep your eyes peeled for him, because you will miss him if you don't. Mike shows up when Billie Jean (Emma Stone) and her new girl "friend" Marilyn (Andrea Riseborough) go out dancing for the first time. A dude comes up and tells BJK he's a fan of hers and asks her to dance - the entire thing is shot watching the two actresses; the actor is incidental to what's happening between them. So when his face is visible for the briefest moment I was surprised to see it was Mike Vogel.

And I was even more surprised when I went looking on the movie's IMDB page and he's not listed. The only hint I have that it was indeed him is a mention of the credit on Mike's "Actor Bio" on the website for his new show The Brave, which mentions he's in the film. I should have stayed and stared at the film's credits to look for Mike - one of you guys do that for me when you see the movie this weekend, please!

Anyway this isn't that weird - actors get cut out of films all the time. Still the flash we do get of Mike is promising - he's got a 70s mustache, and as with most everything Mike Vogel has worn, he wears it really fucking well. I want to get a screen-grab of it as soon as possible since it will be our only record.
.
Who? Jason Adams When? 10:17 AM
Labels: Andrea Riseborough, Emma Stone, gratuitous, Mike Vogel

I wanna have Mike Vogel's mouth babies. I've been in lust with him since Under The Dome (IMO the ONLY reason to watch that hot mess after Season 1), and that lust only grew with Childhood's End.

Make sure you see prime Twink Mike, where I noticed him for the first time, in the the shlockfest The Deaths of Ian Stone

Oh we've been on Team Mike Vogel ever since the Texas Chainsaw remake in 2003! Now THAT is Prime Beef.

"mouth babies" - thanks mark alexander, i'm adding that to my lexicon immediately