.
I had to expel my review of Mother! from my body as quickly as possible this morning so that already went up, read it here, but as you maybe know if you've been paying attention I did go to the film's NYC premiere last night at Radio City Music Hall -- there was an elaborate scavenger hunt for tickets that I told y'all about last week -- and so I should share some about that, I suppose.

Not that I have a whole lot to share. I picked my tickets up from the same dude with the mustache that I told you about last week (see a new picture of him dressed up for the premiere - we were told to dress funereally - here) and headed over to the theater, and it was total madness and chaos (a sign of the movie to come) outside of Radio City. I didn't even go near the red carpet so I didn't even find out until later that night it was actually a black carpet... 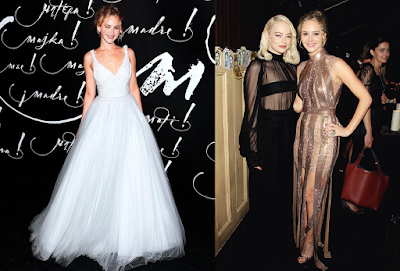 ... but as seen up top I did stop and check out the hearse smothered in flowers that they had parked in front of Radio City, which was a fun touch. Anyway I have crowd-phobia (it's a good thing I live in New York City, right?) so the boyfriend and I pushed our way to the side-entrance and made our way to our seats. They had an organist playing ( see video here) which was cool and the long wait for the movie to start began. People watching was a lot of fun, at least...
.

... (and yes that's a second dress, different than what she wore on the black carpet just a few minutes earlier - it must be fucking exhausting, being Jennifer Lawrence) (and that would be a great alternate title for Mother!, honestly)  and the movie started. And I watched the movie, which I already described. And then as the movie ended and we all sat slack-jawed in our seats some lights appeared up on the stage and Patti fucking Smith walked out and started singing over the credits. Okay! She sang three songs but I only took a minute of video because it was more a moment to soak up, but here, enjoy:
.
.
Who? Jason Adams When? 11:39 AM
Labels: darren aronofsky, Jennifer Lawrence, Starfucker