My Weird Quest For Mother Tickets

.
If you don't follow me on Instagram then you're missing out on 1) tons and I do means tons of artfully positioned photographs of the New York City skyline and of paintings I like in museums (it gets real lively on there lemme tell ya what) and 2) you're missing out on the crazy adventure I had last night! So I will re-tell it here (or you just click over to the Instagram post where I told it the first time, too).

That picture up top promising tickets to the premiere of his new movie Mother! (see the trailer here) was posted by the director Darren Aronosfky yesterday afternoon. I called the phone number in the picture and a muffled creepy voice recording said to go down to the "Charging Bull" at Bowling Green and to look for someone with a horn between 7 and 8pm. Since that's close to my office, and right around the time I get out of work, I figured sure, I'll give it a try.

I went down and stood there for awhile watching tourists snap "funny" pictures with the bull's testicles, keeping my eyes peeled for a person wearing a horn - I was looking for an animal horn, since the bull was right there. Then right at 7pm there was a woman that a couple other people had spotted first with a big musical horn (I think it was a baritone?) strapped to her side. She was wearing a grey jumpsuit, and a little cap, and as I made my way over to her several other people who were on the hunt as well strided up - we formed a line, and one by one the woman took our thumb-prints on little pieces of paper. She handed me my paper and gave me directions down a couple winding streets, where I were supposed to deliver the paper to a man with a suitcase who would be waiting for me. She was sending people in different directions so clearly this game was spread out all over the area.

I took my paper and went walking. If you know this area of Manhattan (around Wall Street) then you know the streets can get very small and very empty, alley-like, very quickly, and with two swift turns I found myself in a narrow barren street all by myself looking for a man with a suitcase. I saw one man smoking a cigarette a little ways down and asked him if he knew anything about Mother! tickets and he just glared at me like I was a weirdo - part of me wondered if it was part of the game and if I was supposed to harass him at that point? Thankfully I didn't do that and I saw the street I was on winded to the left (it really seemed like a dead end at that point) and halfway down it was this...
.

This is the man I met in the alleyway for a bell pepper (see my previous picture for the story) @mothermovie @darrenaronofsky #film
A post shared by Jason Adams (@jasonaadams) on Sep 7, 2017 at 4:30pm PDT

This was clearly what I was looking for. The man stared me intently in the eyes (I was a little weirded out at this point, as well I should be, and he was relishing it) and held out his hand for the paper with my thumb-print on it. I held it up to hand it to him and before I really realized what was happening he had flicked out a lighter and set the paper on fire! It was flash-paper so it exploded and burned away quick. Show off.

The man then held up the suitcase and gestured for me to support it. I did and he flicked it open and lifted the top, and as he did a great beam of light illuminated his face. We were very close at this point, just the width of the suitcase separating us, and he was still staring at me intently as the light flickered across his mustache. It was... intimate. I was just straight up laughing at this point. The man reached into the suitcase and pulled out...
. 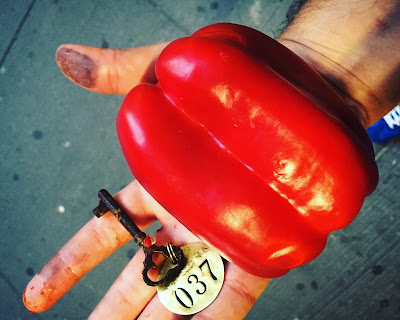 ... a red bell pepper. He set the suitcase down and handed me the pepper and told me they would see me on the 13th. I stood there for a moment, staring at the pepper, kind of unsure what to do, but I could hear a jungle from inside its hard shell so I put two and two together, and a little way down the alley - after stumbling away from the man, then stumbling back and asking to take a quick picture, and then stumbling back the other way again - I ripped the pepper open and inside of it was a key.

On the key-chain there was a number, and on the backside of that there was a phone number. I called it and the same creepy voice I heard on the first phone call gave me instructions for attending the premiere next week. So I guess I am going to the Mother! premiere next week! Stay tuned for a report from that. Hopefully the movie itself can live up to this already grand adventure.

That's pretty awesome. I work a few blocks from there, wish I had been following Aronofsky before you mentioned this. How great is it that we have 2 Michelle Pfeiffer flicks coming out this fall? ( I don't care who else is in them, they are Michelle Pfeiffer films, first and foremost.)

I kept reading thinking, "This is somehow going to turn out to be the review of the movie."

This reminds me of a Shirley Jackson story ...

That is so awesome! And Wannabe Super Mario Bros looks cute!