Throw It Out The Airlock 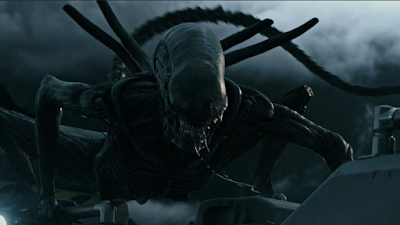 The best scenes in Alien Covenant are basically a re-write of the best scenes in the most maligned Alien movie of them all (at least without a Predator in the title) -- yes I speak of Alien Resurrection, with its horrific Ripley clone wax museum and eroticized strangeness. (Yes Covenant's already legendary flute scene is its best scene, obviously.) In Covenant all of this is crammed into the second act, and here the movie (although largely devoid of actual alien action in these moments) achieves its own momentarily hallucinatory magic, with wind whistling down stony corridors with multiple Fassbenders flitting in between.

After a Blade Runner-ish prologue the first act of Covenant feels like a reboot of Scott's own first Alien movie (with some Gravity sprinkled on top for good measure) and the last act is kind of a rushed re-staging of Cameron's Aliens - altogether you could say that Covenant is kind of a Frankenstein's Monster of the entire franchise, hoary bit stapled clumsily to hoary bit. But we're talking about Karloff's movie Frankenstein, big and lumbering and dumb, decidedly not Mary Shelley's book Frankenstein, which raised an eloquent aberration at its morbid center. This thing is plods and groans. 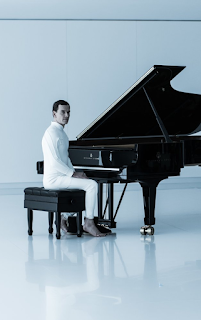 Oh Covenant thinks it's a smart one though, and it's suckered in a lot of smart people too - I've seen defenses of its dumb characters (Ridley just thinks people are dumb!) and its lousy logic (it's just the logic of a nightmare!) but it all just read as lazy and sophomoric half-assery from where I was sitting. Scott strains for an interstellar fairy-tale but this is no Space Suspiria - this is no dream. Yes Rosemary, yes Ripley, this monster-baby is really happening.

The nonsense just piles too high too fast. Smart characters acting super dumb can only be so tolerated, especially when you're forced to listen to them spout philosophy and take it seriously at the same time. Even besides the "people poking strange things with sticks" and the "wandering off into caverns alone with known villains" Z-grade slasher-movie stupidity there's just no coherence to the film's timeline - face-huggers turn into chest-bursters turn into ten-foot tall xenomorphs within minutes when dictated to do so by the rando needs of the plot; entire sections seem stomped into acidic mush.

To be honest I think I liked Prometheus better - Prometheus was just as dumb but it had a couple of for-the-ages scenes, and the scenery was at least a little lovelier to look at, Scott's camera allowing us long and lingering looks at those strange alien worlds. Every time I thought I was seeing something beautiful in Covenant the cutting went and mucked it up, and some of the CG here is goofily amateurish. (Egads that baby chest-burster was positively Spaceballs-ian.) I walked out of the theater shrugging, a bit dazed, but in the 48 hours since I've birthed my own rage baby - this thing's a mealy-brained blight.
.
Who? Jason Adams When? 6:09 PM

I agree with you and laughed at your Frankenstein comparison, it's a perfect description. LIFE was so much smarter with it's science and fear. It sucked and could have easily been a better movie if they went with a Prometheus sequel-ish theme. I like Prometheus and was expecting something similar (like more Ancient Alien stuff)!!

I didn't dislike it, but I definitely wasn't impressed by it. Although I will say that when the Fassbender on Fassbender stuff was happening, the first thing that popped into my mind was 'JA is going to do a post on just this scene as soon as he can get the screenshots.' I hope I am not proven wrong on this.

I liked this movie more than you, but I definitely understand the criticism. The main takeaway is that Michael Fassbender is maybe the most magnificently sexually perverse actor working. I'm having real difficulty imagining any other "name" actor playing this bizarre mix of straight/high camp. Anyway, I thought you might appreciate the "kiss" gif:

Each set of characters in the first three Alien films did stupid things, but there was at least some reason for it: the first set of characters were space truckers, the second set were 'Marines' but acted and were probably more akin to Vietnam draftees, and the third movie was filled with convicts.

The problem with Prometheus and Covenant is that you have people specifically trained for these types of situations acting like complete amateurs. That's just lazy writing. Easier to write that a trained idiot wanders into the cavern and is facehugged than to think about how you would get someone intelligent into that spot.

Despite the gorgeous sets and delicious cinematography, I HATED this movie with the burning passion of a supernova. I have not watched so many adults make so many stupid decisions since the 2016 election. I know we're supposed to suspend disbelief but a thinking person can only be expected to tolerate so much. "Let's break protocol on a billion-dollar space mission and land on an unknown planet, risking the lives of over 4 thousand people." "Let's go outside without helmets" "Let me break off from the main group to collect mud." "Let me go alone into an unknown wood and smoke a cigarette." "Let me bring the ship carrying 4000 people closer to the storm because my wife may be in trouble....her life is more important than this mission or the sleeping 4000 people on the shit." "Sure Creepy, Potentially Murderous Android Whom I Do Not Really Know or Trust, I will follow you into the basement and stick my head into your pulsating pod." By the end of the movie I was rooting for the monsters!

Adding insult to injury, Fassbender had to conceal his ever-present VPL because he's supposed to be a junkless droid. Can't win for losing.

I think it helps to approach both Prometheus and Covenant as David the Android spin-offs. As sequels prequels whatever to Alien they are just too silly and unnecessary.