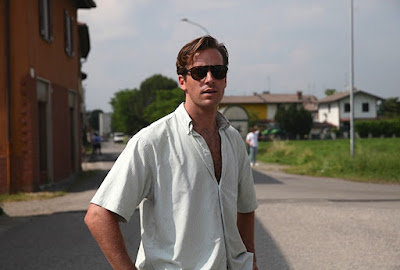 This morning I think I know what emotions swirl around in a parent's gut as they say goodbye to their first-born on that first day of college - this must be what that feels like, in a way, as I read the reviews from Sundance out Luca Guadagnino's film Call Me By Your Name. Part of me doesn't want to let it go - I was here first, dammit! Or amongst the very first few, anyway - I did get the news from a couple of other sources, but I kept on it and kept on it, well before any of the bigt movie trades had even announced the film - collecting all the behind-the-scenes pictures and getting everybody to go out and read Andre Acimen's wonderful book. 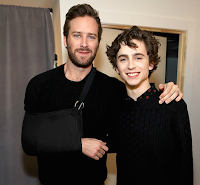 Anyway my point is I feel attached and protective and okay yes jealous but proud, very very proud, today, because it seems all the reviews from Sundance are raves! Or anyway all the ones I've made my way through so far. If you haven't read the book yourselves I think you might want to skip the reviews - they give away an awful lot of the plot. But on the other hand since it's just a basic coming-of-age story - but super gay! - perhaps knowing the plot going in doesn't entirely matter. Anyway here's one of the vaguer bits from Boyd van Hoeij's review in The Hollywood Reporter:

"Starring a never-more-sensual Armie Hammer as the intern, the breathtaking Timothee Chalamet (formerly of Homeland) as the son and the great Michael Stuhlbarg as the father, this tender and minutely observed queer romance, set in bucolic Lombardy (changed from the Ligurian seaside in the novel), could, with the right marketing, become a breakout title for Sony Pictures Classics."

If you read the reviews around Stuhlbarg's got a big scene towards the end of the film that is getting a lot of attention, which translates to me that Guadagnino nailed the book, because that scene in the book is what made the book for me, and if he got that right then he got it all right. All of it! Peach be damned, it is about that scene. Way back in July talking about Stuhlbarg in this role I said:

"I'm especially excited that he was cast to play the main character's father in Luca Guadangino's upcoming film Call Me By Your Name -- there's an absolutely killer scene for his character towards the end of the book that, if the movie works, will be extraordinarily moving; hell it could even be an Oscar clip."

Let's start the damn campaign now! Alright so feel free to skip around and read the reviews if you've read the book - I will of course keep up on it and share every bit of news we get until we finally get a release date and some footage and so on and so forth, obsessively, because I care. 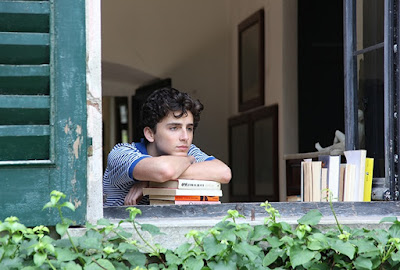 I am so happy about all these positive reviews. Hoping this is a big breakthrough for Armie!

Bought the book on your recommendation, but I set it aside about 30 pages in, because I found the narrator too damn precious and irritating.

I'll give it another try, since you think so highly of it, and I trust your taste.

I was in the audience last night at Sundance and I will say the crowd was transfixed. I'm skipping all my other movies because I want it to be the last thing I've seen here.

I also bought this book based on your recommendation and I loved it. Actually, saying that I simply loved it would be an understatement. I'm not gonna go into detail about my love for the book since that would take all day. I just wanted to thank you! ;)

Also, definitely my most anticipated movie of the year. Happy to read about all the raves!

I loved the book (thanks for the recommendation)and I'm looking forward to see the film.

I'm really glad so many of you loved the book and that I was able to bring the beauty of it into your lives! Thanks for letting me know!

Anyone have a ballpark idea of when it might come out?

Yeah, I read the book based on the coverage from this site and i'm VERY interested in seeing how the movie turns out. Armie has had the WORST luck in movies though.

Any news about nudity? Frontal nudity?