I have been skimming through James Wan's sequel The Conjuring 2 today for some reason (read my review from when it came out right here) and saw this scene and chuckled.

Little girl, there is no reason to be afraid of bookshelves!
Bookshelves are your friend!

Anyway in my review of the film I made reference to something spoilery from the movie, and I'm going to get into it some more now that the film is out on blu-ray and presumably any of you who might care have seen it - and yes, it is shelf-related too! - so let's do that after the jump...

Here's what I said in my review:


"... take note of the mid-film scene set inside the Warrens house where Vera Farmiga's at the kitchen table -- if you look behind Vera, and I mean if you look behind her from all the multiple angles the movie shows her from, you will see a certain name that will come in handy to remember for later in the film. It is ridiculous - the name is on every wall of their house, and their daughter is making a beaded-necklace with the name in it. "


Going back through the film today I see this is actually split up across a couple of scenes, one in the Warrens' living-room and one in their kitchen, but it's hammered so so hard, you guys.

The name VALAK is scrawled
all over the Warrens damn home. 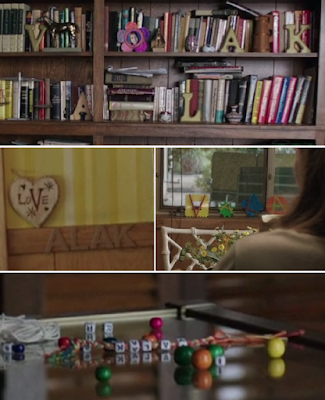 VALAK of course turns out to be the Nun Demon's name, which is very important late in the film -- you can read a great Who's Who about who "Valak" is in actual demon lore, from outside the film, right here. Basically he's BMOC in Hell.

Anyway The Conjuring 2 really needed to do a better job of hiding his name - I mean of course I'm looking right at the book-shelves, James Wan! You're not gonna hide anything from me there.

That name being plastered literally ALL OVER the Warrens' house was the one thing I really hated about The Conjuring 2. It totally took me out of the movie, because it was so obvious that the letters meant SOMETHING. And when what that something was finally came to light, I actually rolled my eyes and groaned out loud in the theater.