Peach of the Day 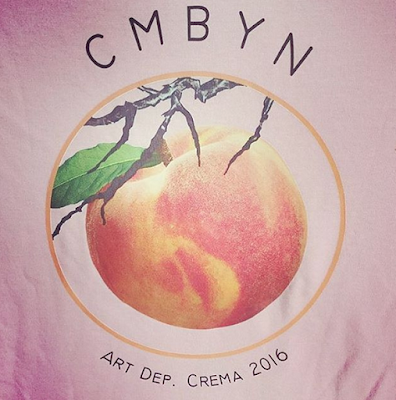 Okay so if you have read Andre Aciman's book Call Me By Your Name by now -- and I've been telling you to get on that, for goodness sake! -- then this is going to make you very very excited. As you probably know Luca Guadagnino is making a movie version of the book -- we have been on top of it! -- that stars Armie Hammer and Timothée Chalamet, and it's currently filming in Italy.

Well the film's casting-director Stella Savino has had one of the several Instagram accounts worth following from the set and this morning she posted the above image of a t-shirt that the Art Department designed to memorialize the film's shoot and -- this is where your knowledge of the book comes in -- it has the peach!

I won't spoil it for those of you who don't know but most of us who have read the book weren't sure if the peach was going to make it into the movie (what happens with the peach is... something we haven't seen on a movie screen before) but this gives us some hope that the scene will actually be in the film. And where there's hope, there's hope! I hope, I hope, I hope. 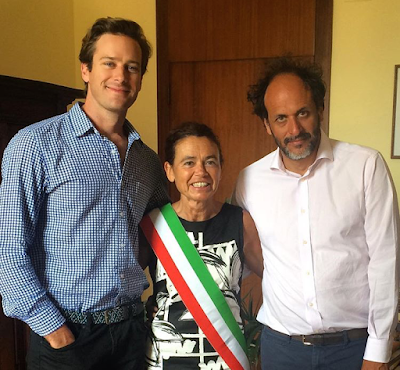 And Armie himself posted that picture yesterday - he's posing with Guadagnino on the right and in the center is the mayor of the Italian town where they're filming.
.
Who? Jason Adams When? 12:20 PM

Oh my God... (O_O) That scene was something! It took sex-games to a whole new level.

I'm still on the fence here, because I'm not sure if Timothée and Armie will go all the way...

someone please spoil the peach thing.... I've so behind on all the books I already have, there's no way I'll read the book before the film comes out

I wanna read the book but I'm broke and I couldn't find any free ebooks, so please can someone spoil or even better, give us the peach scene so I know what happens?

Okay I will spoil it here in the comments -- LOOK AWAY IF YOU DON'T WANT TO BE SPOILED...

It sounds weird! It is weird! But it's also pretty sexy too. But how can that possibly work on screen? What works on the page often doesn't translate to visuals -- making Armie Hammer eat a cummy peach could end up being campy as fuck.

I feel bad, but I had to stop reading the book at that point. It was just too much. Still looking forward to the movie though.

Damn. I need that scene to be in the movie. Don't know how but I do.

@JA what's wrong with campy as fuck?! We'll take it!

I kind of clutched my pearls seeing that peach pic.

(As if I haven't actually seen or done worse.)

But I also have to wonder if they will put in that bathroom scene because even I thought that was way too weird.

AGREED. It took me a solid 10 minutes to decide that I wasn't misinterpreting what I was reading.

Okay but now I must ask... what is the bathroom scene?

OMG, I read it so long ago that I don't remember the bathroom scene. Maybe I should read it for a third time?

But also: I want that shirt.

I'm at the mid way point in the book and I just keep imagining the movie! I can't wait!

The peach scene was sexy. The bathroom scene was a grave misstep in what is otherwise a pretty perfect novel.