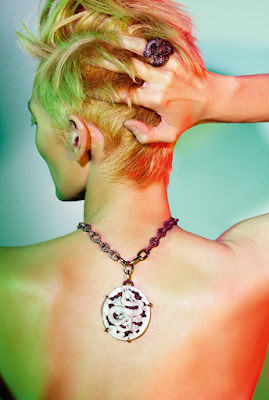 There is a brief update on The Greatest Movie That Doesn't Exist Yet But Very Well May Exist Very Near In The Future! I speak of course of I Am Love director Luca Guadagnino's remake of Dario Argento's Suspiria starring Tilda Swinton. (What, you thought I meant the next Minions?)We haven't heard anything since September-ish, but the two of them have been busy finishing and promoting A Bigger Splash. Anyway Luca did a Q&A recently and at said Q&A he shared that they very much intend to make this movie, and also these three things:


1) It will be set in Berlin in 1977
2) I Am Love composer John Adams will hopefully do the music.
3) It will be his most "Fassbenderian" film to date

Straight up, Luca Guadagnino is trying to kill me. He wants my heart to explode, he does. Or even more accurately he wants to put a jinx on me that takes human form and smashes my face against a window-pane before dragging me across a roof-top, stabbing me in the exposed heart, stringing me up, and tossing me through a stained-glass window. That's what Luca Guadagnino wants to do to me! And I am good with that, actually.

I actually kind of can't wrap my head around what a mixture of Argento & Fassbender would be - the former is all hysteria and psychosis while the latter is sedated miserablism. Visually I can picture it, and maybe that's what Luca means, but emotionally they are very different filmmakers. That said they are different but they are also FAVORITES so I will shut up and wait to see what he's getting at the second it is possible.
.
Who? Jason Adams When? 11:46 AM