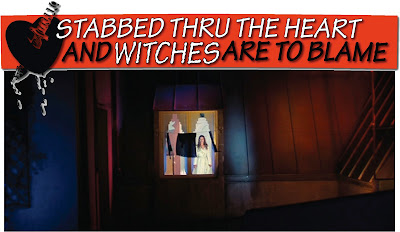 Hit the jump for the rest; it gets much more graphic...


I left out most all the stuff with the roommate running around pounding on doors trying in vain to get help that punctuates this sequence because I really just wanted to orgasm on the colors of the murderin', which are where it's at - good god are they where it's at! -  and the other stuff was distracting from the flow. But by doing so I'm denying myself the second pay-off - the final shot where we see the sky-light's falling glass and metal has also killed her below.

Well I was denying myself that, until I stopped it. 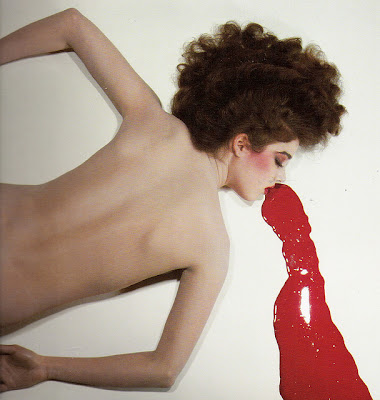 Well Guy published that picture in 1980, so it's really the other way around. Dario much, Guy?

It was the 35th anniversary of Suspiria last week - Dario Argento's masterpiece was released on August 12th, 1977. I wasn't even a month old yet! Elvis would die in just four days! What a heady Summer it was.

Alright I could just sit here and show pretty pictures from this movie all day long. This movie astonishes me every time I watch it - moreso now that we've seen Argento disintegrate into total and complete awfulness. I'd hoped that his reunion with Suspiria's cinematographer Luciano Tovoli on his upcoming Dracula 3D might signal a return to form, but judging from that trailer... heeennnngggghhhhhh....

We've done one other scene from this movie for this series before, and it was an early one - just our 12th edition, 5 years old in a couple of weeks. Today I was amused to see this exchange in the comments for that post:

Homeslaughter: How many of these [Thursday's Ways Not To Die posts] can you get out of Suspiria?

Me: It was a toss-up between this one and "Stabbed in the exposed, still-beating heart" and "Impaled By Falling Stained Glass"... I'll probably do those someday... "

--------------------------------------
Previous Ways Not To Die: Shark Kibble -- Is That a Straight Razor In Your Trunks Or Are You Just Happy To See Me -- Bad Dates -- Fry Guy'd -- Super Battle Bystander Shrapnel Shred -- Staring Contest of the Dead -- Satanic Self Sacrifice -- Fist and Fortune -- Psychedelic Penis Slice To Window Toss -- For Crimes Against Accent -- Sacked -- Speed Bumped For Traffic Spikes -- Shark Versus Jet-Ski -- Hot Oil Treatment -- Tucked In By Jason -- Just A Pair of Snowbodies -- Poison Pellet Kibble Swap -- Dolly Disassembled -- Fire Escape Fall Out -- Unbuggered -- Tell 'Em Large Marge Sent'cha -- Blue Man Gooped -- Tongue Stung -- Now Wouldn't Cha, Barracuda? -- Leaving on a Rat Plane -- Panthers! -- Fashion Faux-Pwned -- "It's Just A Box." -- Blasted Pigeons -- Taunting Ahnuld -- The Too Hot Tub -- Beyond the Veil -- Sunken Prayers-- Super Crack -- Brains Blown -- Fur For The Boogens -- White Hot Bunny Rabbit Rage --Dragged To Hell -- The TV Van That Dripped Blood -- Don't Mess With Mama -- Heads Ahoy --Martyred For Sheep -- Heads Nor Tails -- He Loves Me Knot -- The Great Bouncing Brad --Miss Kitty's 8 Mishaps -- Boat Smoosh -- Meeting the French-Tipped Menace -- A Magic Trick -- Slick Suck -- We Who Walk Here Walk Alone -- Raptor Bait -- Kneegasm'd -- Dare to Dream in Fincher -- Reach Out and Throttle Someone -- De-Faced -- Voluntary Drowning -- Cross Borne -- Pulled Up Hell's Sphincter -- An Arrow Up The Ass - The Numerous Violent Unbecomings of Olive Oyl -- Ack! Ack! Zap! -- Baby's First Acid Splash -- Chop, Drop and Sashimi Roll -- Forever Rafter -- Can't You Hear Me Now? -- Daisies Ways #5 - Harpoony Side Up -- Acid Dip -- On a Wing and a Prey -- For Standing in the Way of Sappho -- Busting Rule Number Three (For The Purpose of Number Two) -- Daisies #4 - Window Dressed To Killed --Hands Off the Haas Orb -- Bullet Ballet -- A Single Vacancy at the Roach Motel -- A School Bus Slipped Thru The Ice -- Trache-AAHHHH!!!-tomy'd - For Mel Gibson's Sins -- A Wide Stanced Slashing --- Daisies Ways #3 - Scratch n' Snuffed -- The Victim of a Viscous Hit & Run-- Curled -- Kabobbed -- Daisies Ways #2 - Aggravated Cementia -- Boo! Nun! -- 2009's Ways Not To Die -- Bug Scratch Fever -- Daisies Ways #1 - Deep Fat Fried in My Own Unique Blend of 500 Herbs & Spices -- By the Yard End of the Stick -- Screwed From A Very Great Distance-- A Righteous Bear-Jew Beatdown -- Fisted By Hugo Sitglitz -- Xeno Morphed -- Fuck-Stuck -- A Vengeful Elevator God: Part 4 -- Lava Bombed -- The Cradle Will Rock... Your Face Off!!! -- The Food of the Nilbog Goblins -- The Slugs Is Gonna Gitcha -- Phone Shark -- Hide The Carrot -- Sarlacc Snacked -- Avada Kedavra!!! -- Hooked, Lined and Sinkered -- "The Libyans!" -- Axe Me No Questions -- Pin the Chainsaw on the Prostitute -- The Wrath of the Crystal Unicorn -- The Ultimate Extreme Make-Over -- Drown In A Sink Before The Opening Credits Even Roll -- The Dog Who Knew Too Much -- Don't Die Over Spilled Milk -- Inviting the Wrath of Aguirre -- An Inconceivable Outwitting -- The Five Point Palm Exploding Heart Technique -- Nipple Injected Blue Junk -- Your Pick Of The Deadly Six -- Thing Hungry --Don't Fuck With The Serial Killer's Daughter -- DO Forget To Add The Fabric Softener -- Any Of The Ways Depicted In This Masterpiece Of Lost Cinema -- Rode Down In The Friscalating Dusklight -- Good Morning, Sunshine! -- Mornin' Cuppa Drano -- The Cylon-Engineered Apocalypse -- Tender-Eye-zed -- Martian Atmospheric Asphyxiation -- Maimed By A Mystical Person-Cat -- The Sheets Are Not To Be Trusted -- Handicapable Face-Hacked -- I Did It For You, Faramir -- Summertime In The Park... Of A Pedophile's Mind -- A Vengeful Elevator God: Part 3 -- Strung Up With Festive Holiday Bulbs By Santa Claus Himself -- A Vengeful Elevator God: Part 2 -- A Vengeful Elevator God: Part 1 -- Decapitated Plucked Broiled & Sliced -- Head On A Stick! -- A Trip To The Ol' Wood-Chipper -- Pointed By The T-1000 --Sucking Face With Freddy Krueger -- A Pen-Full Of Home-Brewed Speed to The Eye --Motivational Speech, Interrupted -- A Freak Ephemera Storm -- When Ya Gotta Go... Ya Gotta Go -- Hoisted By Your Own Hand Grenade -- Having The Years Suction-Cupped Away --Criss-Cross -- Turned Into A Person-Cocoon By The Touch Of A Little Girl's Mirror Doppleganger -- Satisfying Society's "Pop Princess" Blood-Lust -- Done In By The Doggie Door-- Tuned Out -- Taking the 107th Step -- Rescuing Gretchen -- Incinerated By Lousy Dialogue-- Starred & Striped Forever -- Vivisection Via Vaginally-Minded Barbed-Wire -- Chompers (Down There) -- Run Down By M. Night Shyamalan -- Everything Up To And Including The Kitchen Toaster -- Sacrificed To Kali -- Via The Gargantuan Venom Of The Black Mamba Snake -- Turned Into An Evil Robot -- The Out-Of-Nowhere Careening Vehicle Splat -- "Oh My God... It's Dip!!!" -- Critter Balled -- Stuff'd -- A Hot-Air Balloon Ride... Straight To Hell!!!-- Puppy Betrayal -- High-Heeled By A Girlfriend Impersonator -- Flip-Top Beheaded --Because I'm Too Goddamned Beautiful To Live -- By Choosing... Poorly... -- Fried Alive Due To Baby Ingenuity -- A Good Old-Fashioned Tentacle Smothering -- Eepa! Eepa! -- Gremlins Ate My Stairlift -- An Icicle Thru The Eye -- Face Carved Off By Ghost Doctor After Lesbian Tryst With Zombie Women -- Electrocuted By Fallen Power-Lines -- A Mouthful Of Flare --Taken By The TV Lady -- Bitten By A Zombie -- Eaten By Your Mattress -- Stuffed To Splitting -- Face Stuck In Liquid Nitrogen -- Crushed By Crumbling Church Debris -- Bitten By The Jaws Of Life -- A Machete To The Crotch -- Showering With A Chain-Saw -- In A Room Filled With Razor Wire -- Pod People'd With Your Dog -- Force-Fed Art -- Skinned By A Witch -- Beaten With An Oar -- Curbed -- Cape Malfunction -- In The Corner -- Cooked In A Tanning Bed -- Diced -- Punched Through The Head -- Bugs Sucking On Your Head
.
Who? Jason Adams When? 2:52 PM