I Vant To Suck Their Something Or Other 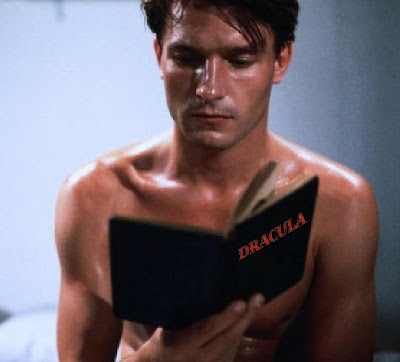 Thomas Kretschmann has got fang-bangers on the brain! (Now I'm picturing him on True Blood - ooh gimme!) Not content to play the most famous vampire in all of history, the count called Dracula, in what looks like it could be the shittiest vampire movie ever made (oh Dario Argento, what hath thou wrought?), Thomas Kretshcmann has now signed on to play Van Helsing in the NBC television series starring Jonathan Rhys Meyers as the Count. (Thanks Mac!) I haven't been playing a whole lot of attention to this series because I'm not JRM's biggest fan (his eyes exhaust me), but well obviously now I will be paying attention. THR offers this bit:

"In NBC's version, Van Helsing is not the classic hero featured in so many retellings. Here, he's a brilliant professor with a cool exterior who is obsessed with revenge and makes him more of a threat to the public than to Dracula."

Mkay. Also joining the show is the also deliciously attractive Oliver Jackson-Cohen, seen below (have I really never posted about him? WTF), playing Jonathan Harker, who'll be a social climbing journalist in this version. One thing you can certainly say about JRM - when he does TV, he surrounds himself with pretty pretty men. (See also: The Tudors, with Henry Cavill.)

Forgive the off-topicness (although maybe not, speaking of hot men...) I think we're witnessing Josh Duhamel's audition for Magic Mike 2 at 1:35 of this first video: