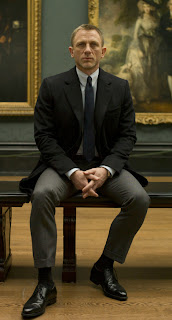 Hey guys, guess what? I can now count the number of James Bond movies that I've seen... on two hands! With the first three Sean Connery movies and the three Daniel Craig movies, we're at six. Six Sexy Spy Thrillers, wa ah ah! Anyway I bring this up because it allows me to state upfront that I'm still a bit of a Bond novice, so you shouldn't listen to anything I say. (As if you ever do. Hello? Hello??) But here's what I gotta say! Skyfall is the sexy slinky kick-ass stuff a James Bond is supposed to be. I may not have seen any of them until my 30s but that doesn't mean I didn't have an idea inside of my head what the brand equaled, and at its best, it's this.

Indeed it might be even more? There's an undeniably super-fun weightlessness to the Sean Connery films that I've seen so far, but I have yet to take anything within them as seriously as I do the richly emotional machinations on display from Daniel Craig, Javier Bardem, Judi Dench, and so on here. Their relationships are enthusiastically complicated, and only moreso as things deepen - Bardem's villain doesn't show up until what, the half-way point? And yet he inserts himself right into the thick of the film's most fascinating dynamic (between Bond and M, of course) while commenting upon it, and somehow manages to become tremendously moving in the process, all while maintaining that Bond-patented outsized creepiness.(And hip hip hoorah for some new exciting Queer Creepiness at that! I am going to needlepoint a pillow that says "What makes you think it's my first time?" on it and put it in my hope chest.) 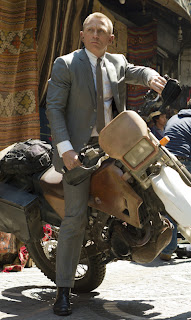 All that, plus super-fun! The action sequences are crisp and ridiculous and entirely captivating, and as captured by Roger Deakins camera... my god. That hand-to-hand fight scene done in silhouette inside that nighttime skyscraper is one of the prettiest goshdarned things I've ever seen. Second only to every shot of Daniel Craig's body in clothes, or out of clothes, or transitioning between those two states... this movie hugs his curves nearly as much as I would if it weren't for that pesky restraining order...
.
Who? Jason Adams When? 5:05 PM

'Except she never tied me to a chair.'
'Her loss.'

This was a conversation between Daniel Craig and Javier Bardem in a movie, and I didn't even write it.

"That hand-to-hand fight scene done in silhouette inside that nighttime skyscraper is one of the prettiest goshdarned things I've ever seen."

YES, damn it, I wish they could rewind the film at the cinema so I could simply watch that over and over again.