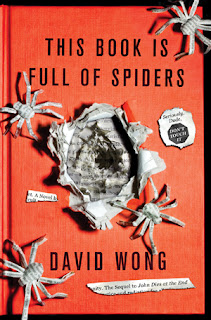 --- Post Death - Shows to go you how outta the loop I am with most nearly everything - I had not a clue that there was going to be a book sequel to the wonderfully creepy book John Dies at the End. It is called This Book Is Full Of Spiders: Seriously Dude, Don't Touch It (shudder slash laugh) and it came out on October 2nd and right here BD reviews it. Don Coscarelli, director of the Phantasm movies, has already turned John Dies at the End into a movie, out in January.

--- Meow Mixed - Final Girl's Shocktober rolls along with Stacie's thoughts on Cat People - the original one dripping in feline atmosphere from Jacques Tourneur that is.


--- Shadow Man - I didn't have time yesterday to write up much on the Hitchcock trailer (it probably didn't help that I didn't have time to watch it until last night) so you should click on over and read Nat's "Yes No Maybe So" on it, he hits all the salient and notsomuch salient points. I think it mostly looks like fun but I'm not sold on Hopkins at all - his voice isn't right and in that scene where he's yelling the rubber chin looks like it's about to rip right off.

--- Terry Time - Matt Damon has joined the cast of Terry Gilliam's next movie, but like Tilda Swinton his role will be small, according to him. Also joining is always welcome oddity Peter Stormare. Damon worked with Gilliam before in The Brothers Grimm. 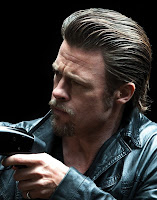 --- Coogan's Rave - I'm starting to think that this Fall could turn 2012 into a banner year for movies - I've already seen several very good to great, challenging works, and there are several on the way that promise more. One of the flicks I'm dying to get a look at is Killing Them Softly from The Assassination of Jesse James... director Andrew Dominik, since JJ was a straight-up masterpiece and all. Well Glenn got to see it and calls it one of the year's best.

--- Future Films - That movie with Jake Gyllenhaal and Hugh Jackman called Prisoners, which surely hasn't filmed a single frame yet, just got a release date of September 20th, 2013 announced. Mkay. I will mark my calendar in blood! Also at that link: James Wan's follow-up to Insidious called The Conjuring, about a real-life couple of ghost hunters played by Patrick Wilson and Vera Farmiga, will be out in July.
.
Who? Jason Adams When? 1:05 PM

I got This Book is Full of Spiders the day it came out and read it all at once. Fantastic. Darker, scarier, smarter, and more cohesive than John Dies at the End, while still being a good tonal match and satisfying as a continuation of the story. And it's not as funny, but it's still hilarious.