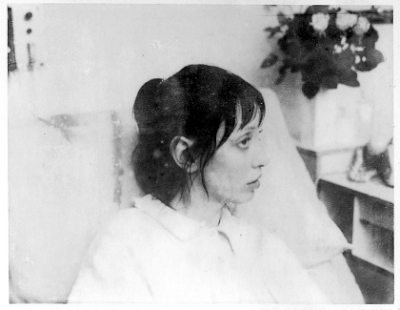 It's not often that I'm forced to wish I was in my hometown of Rochester, New York over my adopted hometown of New York, NY for a film event, so all y'all Rochesterarians who still live there, savor the coolness you've got within your grasp this time while I curse my absence. Bleeding Cool has the word - although they seem confused or misleading about where the Dryden Theater is (it's in Rochester, not NYC) - that the "Super-Rare Uncut Version Of The Shining" that only showed for a couple of days back in 1980 before Stanley Kubrick chopped it up is screening up there on October 22nd. Apparently he edited out a few scenes at the end, including Shelley Duvall at the hospital, which you can see a shot from above. So if you're in or around that part of Upstate New York and you don't go to see this, shame on you, is my point.
.
Who? Jason Adams When? 1:57 PM

I remember seeing The Shining on opening day in NYC eons ago and vaguely recalled one scene at the end with Wendy in the hospital being visited by Ullman (the guy who rents them the Overlook). Kubrick took it out three days later and I want to say that its removal is inconsequential. But I'd still really love to see it again! Hopefully, someone will report back on the scene when they screen the film.

I love that movie!! I just got home from Webster, NY. Drove through Rochester, but didn't really have time to look around.