Awhile back y'all may recall I did a post devoted to all of the hot guys in the Friday the 13th series of films (well, almost all of them, I still haven't quite finished the post yet... don't you side-eye me, I'll get it done eventually). Anyway, I stated therein that coming in just behind my beloved Tom McBride (wheelchair-bound Mark of Part II) was Eddie in Part V as my second favorite of all. 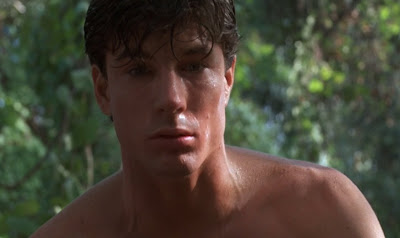 Eddie sneaks off into the woods with his girl to make with the sexual intercourse so popular and yet so deadly in these movies, only to have a leather strap thrown around his head and a tree which is then twisted around a stick until his skull's crushed in. You know, same old same old. Thankfully he spends a good chunk of his time before meeting that violent end sauntering around stripped to the waist and generally being a total teen dream. 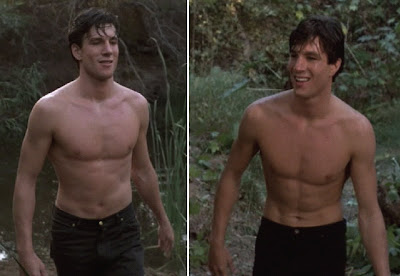 Well imagine my excitement - seriously, just imagine it! - when the actor who brought Eddie to glamorous hip-swaying life, John Robert Dixon, commented on that post last night! Go check it out there. He just says thanks for the attention and expresses awe that this stuff is still making the rounds. Forever, man. You will live in our hearts and minds (and related organs) forever.
.
Who? Jason Adams When? 11:39 AM