Silent Hill (2006)
I realize these are a little dark - rewatching it this week I realized that SH is a murky damned movie, and all the scary stuff is bathed in excessive shadow and gloom. Things that I had a clear image of in my memory - the pyramid-headed man, the gaggle of faceless scalpel-waving nurses - aren't nearly as well-defined on-screen as I remember them to be. See:

I know - no, you don't see. Sigh. It works fine while watching the film - it's a stylistic choice that's actually rather attractive and atmospheric on a bigger screen - but not so much for taking tiny screen-grabs for this. So if you haven't seen the film and can't tell what the heck is going on up there in the shots above, and you don't want to click on every picture to embiggen them one by one - although you can, and they are clearer if you embiggen 'em - here's the gist: Bad Lady gets a crotch-full of possessed barbed wire and it rips her in two from the inside. Ta-dah! I know, I know - good times. 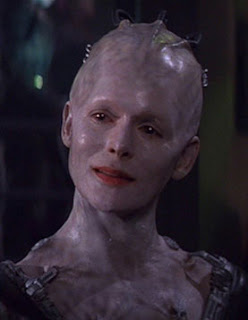 I figure I went to town with the penis-chomping last week, so it's only fair to take a full-frontal assault upon the fairer sex and their lady-bits this week, right? If one could really consider perpetual ball-buster Alice Krige, aka The Borg Queen, as a typical representative of the so-called fairer sex, of course. Lady scares me! Here especially, with her mad-eyed religiosity and moralism - all the better to send a barbed skewer straight up her hoo-ha, I say! That'll teach her for all that god-talk. Pray on that, sister friend!

*No! I solemnly swear that I will never ever make you look at that disgusting scene. Yuck.

-------------
Previous Ways Not To Die: Chompers (Down There) -- Run Down By M. Night Shyamalan -- Everything Up To And Including The Kitchen Toaster -- Sacrificed To Kali -- Via The Gargantuan Venom Of The Black Mamba Snake -- Turned Into An Evil Robot -- The Out-Of-Nowhere Careening Vehicle Splat -- "Oh My God... It's Dip!!!" -- Critter Balled -- Stuff'd -- A Hot-Air Balloon Ride... Straight To Hell!!! -- Puppy Betrayal -- High-Heeled By A Girlfriend Impersonator -- Flip-Top Beheaded -- Because I'm Too Goddamned Beautiful To Live -- By Choosing... Poorly... -- Fried Alive Due To Baby Ingenuity -- A Good Old-Fashioned Tentacle Smothering -- Eepa! Eepa! -- Gremlins Ate My Stairlift -- An Icicle Thru The Eye -- Face Carved Off By Ghost Doctor After Lesbian Tryst With Zombie Women -- Electrocuted By Fallen Power-Lines -- A Mouthful Of Flare -- Taken By The TV Lady -- Bitten By A Zombie -- Eaten By Your Mattress -- Stuffed To Splitting -- Face Stuck In Liquid Nitrogen -- Crushed By Crumbling Church Debris -- Bitten By The Jaws Of Life -- A Machete To The Crotch -- Showering With A Chain-Saw -- In A Room Filled With Razor Wire -- Pod People'd With Your Dog -- Force-Fed Art -- Skinned By A Witch -- Beaten With An Oar -- Curbed -- Cape Malfunction -- In The Corner -- Cooked In A Tanning Bed -- Diced -- Punched Through The Head -- Bugs Sucking On Your Head
.
Who? Jason Adams When? 9:24 AM

To take things over to one of my current obsessions, Krige is brilliant in Deadwood.

Damn, I really have to move Deadwood up in my queue, don't I?

Yes, you really fuckin' do.