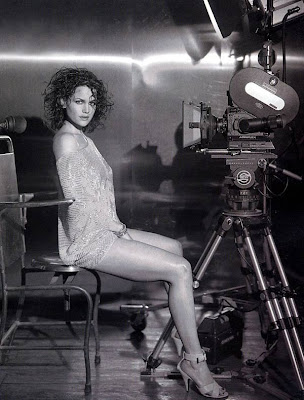 I love me some Carla Gugino (Karen Sisco was an awesome, awesome show) so this news (via Superhero Hype) is of the good variety to my ears:

"Carla Gugino (Sin City) has joined the cast of Watchmen, the Warner Bros. adaptation of the DC Comics limited series... She joins Patrick Wilson, Jackie Earle Haley, Matthew Goode, Billy Crudup, Jeffrey Dean Morgan and Malin Akerman in the Warner Bros. movie, which is set in an alternate America that has passed a law banning costumed crime fighters. When one is murdered, the remaining members set out to solve the mystery.

Gugino will play Sally Jupiter, a burlesque dancer-turned-costumed heroine and sex symbol the Silk Spectre who is part of the Minutemen, a group of heroes who preceded the Watchmen. She also is the mother of the new Silk Spectre (Akerman). Gugino is expected to portray Jupiter in varying eras, playing different ages throughout the movie."

I LOVED Karen Sisco. Another one of those shows that just couldn't last b/c it was too damn good