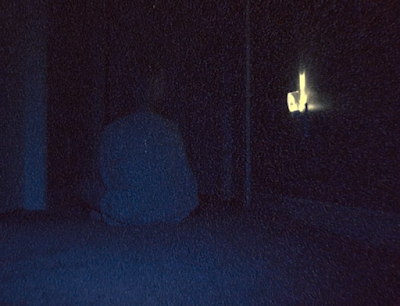 With theatrical releases being one thing and streaming being another there will surely be several Skinamarink days, but for today the little horror movie that could is hitting a few hundred theaters around the country -- check the film's website for locations (although I heard a rumor that it's playing even more than you'll see there so just check your local theaters). I reviewed this movie, which is about a little brother and sister left alone one night with something lurking in the dark, several ages ago when it screened at the Fantasia Film Festival in August -- read that here. I watched the movie on a semi-lark and one hundred minutes later knew I had to write about it immediately.

And even though I have no ownership of the movie (that honor belongs to writer-director Kyle Edward Ball, whose name you should remember and who you can follow on Twitter right here) I admit this week I have felt a little proud parentage  (I am on the poster -- see the bottom of this post -- after all!), having been one of the first reviewers to say, "Hey everybody! Stop what you're doing and look at this!" Now the movie's the Critic's Pick at the New York Times! And listen, as I said in my review this movie will be divisive. It's not an easy sit. It weaponizes boredom and a lot of people don't vibe on that. It's fine. It wasn't made for everybody. The fact that something this challenging and odd is getting this much buzz makes me ecstatic on its own.

But if it does work on you, as it did for me like gangbusters, then hold onto your butts y'all. Anyway I wrote some more about the film today at Mashable, trying to get you in the right head-space for the film -- click on over to read it. There are some spoilers in the piece, so beware. Most importantly -- give this movie a shot! We need to at least try to embrace it when somebody tries something new. And having watched the film repeatedly now lemme tell you -- if it works on you once it works on repeat viewings. I wasn't sure it would, but it totally does. The vagueness of it, the atmosphere -- it keeps on keepin' on.

Just found out (thx to my buddy @jshawhan for the pic) that I got blurbed on the SKINAMARINK poster! Couldn’t be happier to proselytize paper-wise for this specific movie - so freaking scary! Out in theaters in January and @Shudder after that https://t.co/6Y0XBk5lB6 pic.twitter.com/tuddQN6dsJ