From the Maker of M3GAN... But Before 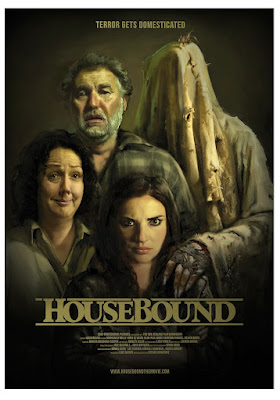 I am crazy late on this one so me doing a post telling you to watch the 2014 horror flick Housebound today is like me taking to here to go, "Toast? Heard of it? It's burned bread! And it rules!" And yet here I am, telling you that while you eat your burned bread you should also watch the 2014 horror film Housebound, which also rules. I remember hearing about it back in the day and trying to find it to watch -- once upon a time it was harder to see things, you see -- and then my mind trailing off to the other gazillion things that have happened between 2014 and now.

It wasn't until I saw M3GAN (sidenote: which is already getting a sequel, no shock there) this last week -- read my review here if you missed it -- which is from the same director that my brain was able to whirr its rusty ass back to Housebound. The film's available to stream on Tubi for free right this second, so you've got no excuses. It's a ton of fun. But don't take my simple-brained word for it -- here is a quote from our beloved Stacie Ponder at Final Girl when she reviewed the movie:

"If Housebound doesn't end up as beloved a horror comedy as Shaun of the Dead, then we'll all know for sure that there's no justice in this cruel, cold world. Lawd oh lawd blessed be, this isn't a satire, an homage, or meta anything. Rather, it achieves that difficult balance between genuine frights and genuine laughs as it twists and turns along as a ghost story, a murder mystery, and more. I had no idea where the film was headed, but the journey sure was terrific."

Yeah, that one was a surprise joy to watch back when it came out. Had no idea it was the director of M3ghan. I'll have to see it.