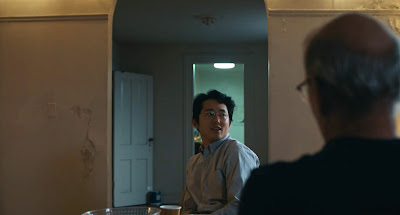 Erik: It's snowing out there.
Richard: I think someone from a
higher floor just emptied their ashtray.

I hope this movie doesn't end up totally forgotten -- I really loved it but it seemed to entirely slip through the cracks during awards season last year. One of the casualties of late year glut. I say definitely seek it out if you missed it. Anyway a happy birthday to Steven Yeun today! 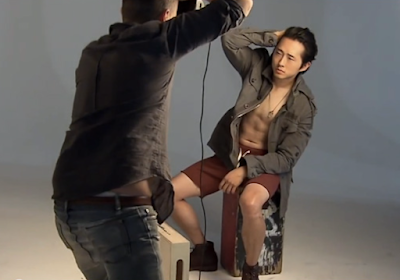 The former Walking Dead star is turning 39 -- I don't know whether it was his decision to leave TWD or the producers but whoever made it as gross and awful as it was in its moment it ended up being the best decision ever! Because 1) it gave him the freedom to become a movie star, which he's pulled off with great aplomb, and 2) it finally cut the cord with me (and many many other viewers) from that show -- when they killed Glenn I never went back and never missed it for a second. Did any of you stick with it?

Anyway Yeun has several projects lined up after this summer's successful team-up with Jordan Peele and Nope -- the most important one appears to be that he's re-teaming with Okja director Bong Joon-ho for Mickey 17 alongside Robert Pattinson, and I can't believe I hadn't posted that teaser trailer above yet. That's not even out until March of 2024 but listen to the cast -- Yeun and Pattinson and Toni Collette and Mark Ruffalo and Naomi Ackie (who's playing Whitney Houston in her biopic out this weekend). It's based on Edward Ashton's sci-fi novel Mickey7 -- wonder why they added ten to the title -- about a clone employee sent to colonize an ice planet. It sounds like Severance meets Edge of Tomorrow. 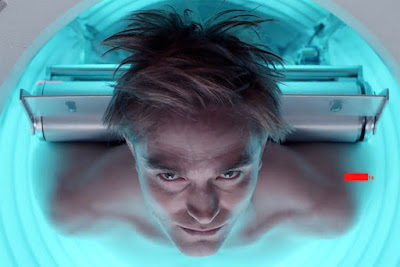 I think I stayed for only a handful of episodes after he died in WALKING DEAD. It really was a blessing for him and all of us.

Humans has been on Showtime for a long time. I just tried watching it a few nights ago, but I wasn't in the right mood. I'll have to try again.
I stuck with TWD til the end. It was ok. Like most seasons, the 'big bad' always wore out their welcome. The show actually made me Samantha Morton averse, b/c I hated her character so much.

Having read the comics, I chose to drop the show before having to see my favorite character die a pointless death again.

I totally forgot about The Humans. I saw the original production in Chicago and liked it a lot so thanks for putting it back on my radar!

Glenn had to die because it was the big shocking death in the original comic book series. TWD got bad for two seasons after Glenn's death, then in season 9 got really good again.