Your Milk is So Sour, and I Can Only Cry 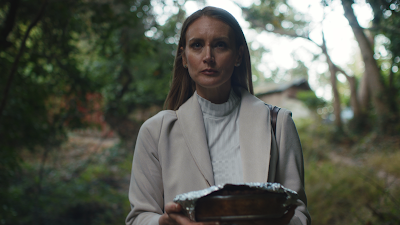 What's more American than Apple Pie, right? It's one of our more prideful nationalistic symbols right up there with Bald Eagles and Uncle Sam -- during World War II our soldiers supposedly offered up the phrase "For Mom and Apple Pie" when they were asked what they were fighting for when being shipped off to fight the Nazis. And so when fifteen minutes into writer-director Beth de Araújo's film Soft & Quiet the pretty blonde kindergarten teacher Emily (Stefanie Estes) shows up to her little gal-pal gathering and peels the tinfoil off her baked confection to reveal a crude swastika carved into the pie's face, well, I wouldn't blame you for gasping.
But you might want to hold onto that breath. Because watching Soft & Quiet you won't be taking many more -- for ninety-one relentlessly terrifying minutes de Araújo will reveal the swastikas and hate symbols that have been hiding in plain sight all along, carved into not just baked crusts but the poisoned brains of pretty blonde kindergarten teachers too. And it's hard not to zoom in on that word in this context -- "kindergarten," a German word we take little note of anymore. It translates to "a garden of children" -- the place where we unload our little ones, trusting that a responsible gardener's been put in place to water their minds and to grow them into the right kind of adults. (Pointedly Emily cannot have children of her own -- no soldiers will be fighting Nazis for her, then. And she knows it.)
We first meet Emily pre-pie, at her school -- she's trying to leave to meet her friends but a child's been left behind, waiting for their tardy parent. She sits with the little boy, the picture of kindness and decency, interested in his thoughts and feelings with the sweet patience of one meant for that gig. And then mid-conversation a noise interrupts them -- a non-white cleaning woman rolls her cart past and Emily's face immediately sours. Emily interrupts the little boy and sends him off to accost the woman, dismissing his shyness as weakness, to tell say that mopping the floors with children present is an endangerment. So we already know before that tinfoil comes off something's not quite right with Emily -- that swastika might as well be carved into her pretty blonde forehead.
Schools have become a primary battleground across the U.S. of course, dropping these early scenes into a discomfiting reality that Soft & Quiet refuses to relent upon once it's got its hooks in -- fights over book bans and alt-right Q-loons running for school boards has been big news ever since Donald Trump rode pride in ignorance and hate all the way to the Oval Office. And it's that terrifying world, the one that keeps those of us paying attention up at night, that de Araújo digs into deep here. The political anxieties that have, like a toxic cloud, seeped off the grand-stand and into all of our homes, our convenience stores, our churches and yes kindergartens. The innocence of the American Dream is befouled, and this brave movie looks the filth of it straight in the face. It's the truest sort of horror -- the one too horrible to be anything but true.

Once the pie is uncovered and Emily and her wine-mom pals start chatting it's all racial grievances in between bites, and what to do about them -- they're forming a club, you see, kind of like a book club but where they only read Mein Kampf. It's like Bo Burnham's "White Woman's Instagram" song gone to seed, where sandwiched between the golden retrievers in flower crowns there's Pepe the Frog memes barfing racist vitriol. One woman says she doesn't hate anybody -- well except for "that brown bitch" who stole her promotion, of course. Another nice lady spouts antisemitic soliloquies on demand. These women, white and plain as a cart-full of The View audience members, let their hair down once they know they're in safe company, only in this case their "hair" is a tender caress of the phrase "White Lives Matter."

Where de Araújo takes her story from there I'll allow y'all to discover in real time, because that's what it is -- the film unfurls as a single 91-minute unbroken take (even if you can see a few seams a la Hitchcock's Rope) and a single 91-minute moment in these women's lives, one which will leave the world irreparably worse than it was 91 minutes earlier. But also "real time" because let's be real, this nightmare is reality. These women are everywhere, not just in the screaming clown-show "Karen" videos clogging up social media, but softer, quieter, whispering white-supremacist ideologies in our kindergarten rooms and spin classes. Of course Blumhouse released this movie -- it's horror in its purest form.

Probably one of the most impressive films in terms of acting and filmmaking, but I’ll never recommend it to anyone. It felt like watching a snuff film. I feel sick.