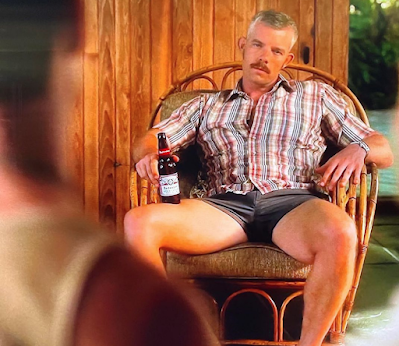 "Of course, there was an intimacy coordinator on set, but Tovey says he was never uncomfortable filming the show’s most explicit scenes, including one in which he makes out and whips a character played by straight actor Zach Meiser. “There is an anxiety that kicks in that you go, ‘This is a straight guy, I’m a gay guy, openly, and we’re going to be kissing now.’ And we did it and then his tongue slipped in and then they cut and he went to me, ‘I just slipped my tongue in there…Is that all right?’ I said, ‘If it’s all right with you.’
They continued shooting the sequence. “The next time we did it, I was like, ‘This guy is up for it! This guy’s committed. I absolutely love this, let’s go for it!’ So then we are like eating each other’s face, tongue in each other’s face. At one point I thought, ‘I’m going to spit in his mouth. No, don’t do that. That’s too much.’ I had to hold back. That’s when you get in trouble.”"

-- Thank you to Russell Tovey for making my Thursday with that photo up top and with his new interview in Variety talking about making the new Cruising-esque season of American Horror Story -- anybody watching? I'm a couple of episodes behind so if you answer that question in the comments please do so sans specifics!

I laughed my ass off.

Yes, you play with a gay guy, and your straight, you better know the boundaries.

We gay guys have been through some stuff. We have been pawed, spanked, tweaked, and kissed like today is ending and that is the only half of it. I say do what you want but don't hurt me. And no I am not into feet. Never understood that.

spit in my mouth tovey!!!

Tovey got his freak on