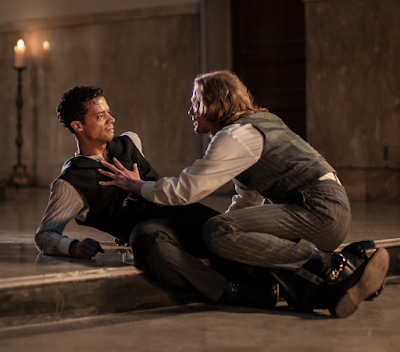 I didn't get much accomplished over this past weekend as my brain needed a rest, but one thing I did manage to do was binge the entire run of the Interview With the Vampire series -- yes, it's universally accepted that bingeing entire television series counts as "an accomplishment" now. Don't side-eye me. It's in the dictionary. Look it up. No I won't say which dictionary. It's not my job to do all of the work, jeez! Anyway Interview With the Vampire rules. Rules. RULES. I had exceedingly low expectations going in but it defied those by leagues of sexy, funny, gory goodness. Jacob Anderson and Sam Reid and Eric Bogosian and Bailey Bass are all terrifically cast and the show delighted and surprised every single episode. (How funny it is was the biggest surprise for me.) Anyway I want season two right this second -- here's Variety talking to the show's creator (and yes this is spoilery so don't read it if you're not done with the entire season) about what to expect from season two, which will basically be as far as I can tell the second half of the book. I haven't read any Anne Rice since I was in college but this show's got me feeling like revisiting. So who's watched? Opinions? Hit the comments!

I loved it. Absolutely loved it. The last ten minutes or so of the first episode nearly destroyed me, with the last ten or so minutes of the fifth episode running a close second (taking the famous up-in-the-air sequence from the Jordan film and raising the [yeah, I'm about to say it] stakes a thousandfold). But I agree on top of all that it was also hilarious. The scene where they're all cracking up at the showing of Nosferatu...plus several times a week I try to shoehorn "so you ate the baby" and/or "legal dope makes me constipated but the wit flows like a river" into everyday conversation. Also: I get chills even now thinking about Rae Dawn Chong packing an entire aria's worth of feeling into "there...he...is." This isn't even the benefit of low expectations, it really was that good.

Fantastic :)
Didn't like the Cruise/Pitt film.
This is beautifully made, top tier performances.
Rice wrote a book about New Orleans gens du couleur, Feast Of All Saints.
Seems the writers melded bits of it with IWAV, although it's been many years...
IWAV was a good short read without the verbose origins stories that made each consecutive book a slog.

The best dialogue on television. An absolute meal for each actor.

I had very low expectations of the series, and thought it was just a cash grab. But when I just out of curiosity attended the Comic-Con panel for Interview. The chemistry between Sam Reid and Jacob Anderson on the panel is what sold me. I even subscribed to AMC+ to binge this show and I love it! I read the Anne Rice books back in the 90s and early 00s. The TV show is so damn good, I need not revisit the books because I want to enjoy the adaptation from AMC. I know that's blasphemous, but so be it.

Oh, and Sam Reid IS Lestat!

I also had low expectations and now I'm like "Brad who?... Cruise what?"

Absolutely loved it! So well written, directed filmed and acted. After the finale I went back to read the book and it’s pales in comparison. The series expanded on the book in all the best ways. One of, if not the best shows of 2022. I hope Mayfair Witches is just as good.

Just finished it. Loved it. Claudia really got on my nerves, I could just watch Louis and Lestat dance, fuck and kill and I’d be happy. Now I have no idea what to expect.